The party leaders were said to have expressed support for the Obaseki/Shaibu joint ticket as the best for the coming governorship in the state. 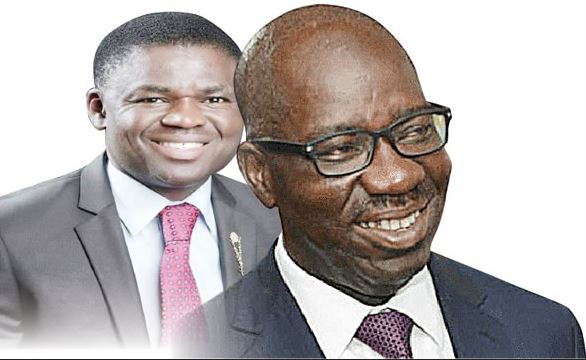 Edo State Governor, Godwin Obaseki, will be allowed to run with his deputy, Philip Shaibu, on the platform of the Peoples Democratic Party if he (Obaseki) emerges winner at the PDP primary slated for Tuesday, June 23, in Benin, Edo State, Saturday PUNCH reports.

It was gathered that this was one of the issues discussed at the meeting the governor had with leaders of the party and some of its governors in Abuja on Wednesday.

Sources at the meeting, who spoke with Saturday PUNCH, said Obaseki pleaded that he be allowed to run with Shaibu if he eventually won the party primary.

The governor was said to have described his deputy as a loyal friend and that he remained a pillar in what he described as the battle to rid the state of godfatherism.

The party leaders were said to have expressed support for the Obaseki/Shaibu joint ticket as the best for the coming governorship in the state.

The source said, “The meeting was held to iron out grey areas like waivers, who will become his (Obaseki’s) running mate if he wins, who will handle the campaign, funding and all that. But the governor pleaded that he should be allowed to run with his deputy if he wins the primary. And it was agreed.

“This is because we do not need to cause disaffection within the ranks of the two men. They have been together fighting the cause they believe in. Asking the governor to pick someone who has been a member of the PDP for long if he wins the primary could trigger a crisis in our party and in the ranks of the supporters of both men. So, if he wins the primary, he is free to run with his deputy.

“Apart from that, he is the one to govern with his deputy after winning the election. We do not need to impose a running mate on him if we do not want to witness a fight in Government House.”

The source added that Shaibu is also believed to be a “strong pillar behind the Obaseki government and there is no way you can remove him from the ticket they have been enjoying for four years now,” adding that “we will not progress if we say he should look for another running mate if he wins the primary.”

It was also gathered that the governor was asked if he would return to the All Progressives Congress should he win the election on the platform of the PDP.

Obaseki was said to have laughed at the suggestion, saying there was no way he would return to a house where he had been rejected.

“The governor asked us how we thought he would return to a house where he was kicked out without any reason, to which we all laughed,” the source added.

On funding, it was gathered that the governor promised that he had the capacity to mobilise his friends to raise funds for his re-election without bothering the party. This action, it was gathered, was discussed at length as the PDP was said not to be rich at the moment.

Obaseki was also said to have told the gathering that he still had friends among the governors elected on the platform of the APC who could also raise funds for him.

The source said, “We do not expect the governor to dip his hands into the government coffers to fund the election. That is not what we want. However, he told us how he raised funds for the re-election of a former governor of the state, Adams Oshiomhole.

“We trust him and we know that as the governor now, he should be able to do the same, if not more. But we did not promise him a ticket because only the people of the state can elect him.”

Speaking on whether the governor would be given an automatic ticket, the PDP National Chairman, Prince Uche Secondus, told one of our correspondents that the party would not impose anyone on its members and the people of the state as its candidate.

“For us as a party, we will never impose anyone on the people and the electorate. It is for them to decide who they want as their governor. So, Obaseki is also going to compete with other aspirants,” he said.