A deputy governor covered by immunity has been ridiculed by a police commissioner in Ondo state. 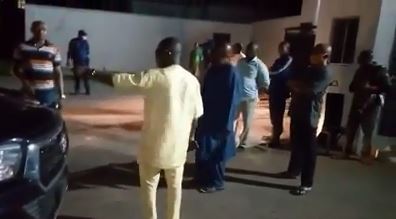 Ondo deputy governor stopped from leaving government house by a commissioner of police
Ondo State Deputy Governor, Agboola Ajayi was on Saturday night humiliated by security agents who stopped him from moving his property out of the Government House.
The Commissioner of Police who forced the deputy governor under what appeared to be house arrest insisted that he knew why the deputy governor was trying to move out of the government house and decided to stop him.
The deputy governor who was helpless could only say a few words even though he has immunity conferred on him by the Nigerian constitution which made the police commissioner stopping him a blatant disregard for constitutional provision.
The Deputy Governor with some of his aides were at the Government House to move some of his personal property out .
The security Agent were said to have asked the Deputy Governor to come back on Sunday in broad day light under which the exercise will be supervised by Government officials.
Meanwhile, a statement signed by Chief Press Secretary to Governor Rotimi Akeredolu, Segun Ajiboye, commended the security agents whose vigilance prevented the carting away of government property from the Government House under a spurious guise.
Watch video below:

Big humilation as Ondo State deputy governor was stopped by the commissioner of police.