President Donald Trump has warned that anyone who vandalizes public statues faces up to 10 years behind bars. 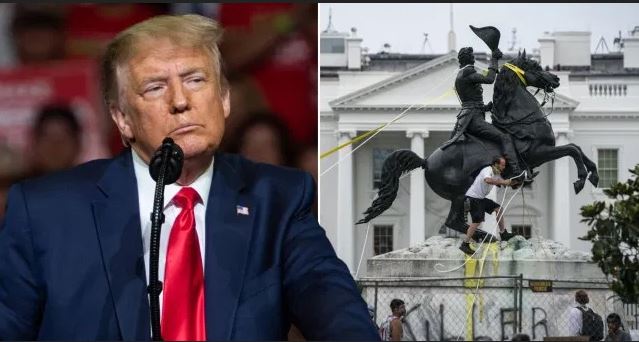 Donald Trump has authorised the Federal Government to arrest anyone who vandalises statues and has warned that any culprit who commits the act faces up to 10 years in prison, amid Black Lives Matter protests in the US.

The US President made the announcement in a tweet on Tuesday, June 23.

He said action will be taken effective immediately, and also threatened that the order could be used 'retroactively for destruction or vandalism already caused.'

He wrote: ‘I have authorized the Federal Government to arrest anyone who vandalizes or destroys any monument, statue or other such Federal property in the U.S. with up to 10 years in prison, per the Veteran’s Memorial Preservation Act, or such other laws that may be pertinent.

‘This action is taken effective immediately, but may also be used retroactively for destruction or vandalism already caused. There will be no exceptions!’

The announcement follows weeks of  anti-racism demonstrations over the death of George Floyd and other African Americans in the hands of white police officers, with activists calling for the removal of memorials to the country's colonialist past.