President Muhammadu Buhari is making moves to break the ranks of the sacked NWC members who have rejected the president’s action. 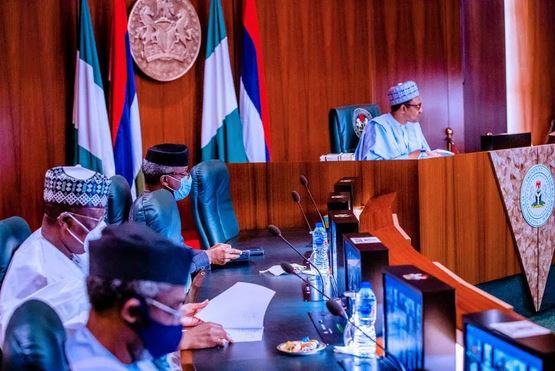 Buhari at the NEC

After his controversial dissolution of the National Working Committee (NWC) of the All Progressives Congress (APC), Thursday, President Muhammadu Buhari is making moves to break the ranks of the sacked NWC members who have rejected the president’s action.

The Hilliard Eta-led 18 members of the NWC, in a statement on Thursday said the National Executive Committee meeting where the decision was taken to dissolve the NWC violated the APC constitution.

“Article 25(B) of the Constitution of the APC is explicit that only the National Chairman or the National Working Committee (NWC) is given the prerogative of summoning meetings of the National Executive Committee (NEC) of the Party either for statutory quarterly meetings or for emergency meetings,” the statement said.

“The same provision of the constitution makes it compulsory for a notice of a minimum of 14 days in respect statutory quarterly meetings and 7 days in respect of an emergency meeting.”

The statement was signed by Mr Eta and the party’s acting national secretary, Waziri Bulama.

They said they were “studying the unfolding drama” and would be “consulting with stakeholders and a team of lawyers on the next line of action”.

The APC NEC meeting which was held at the presidential villa appointed a 13-member caretaker committee to run the party.

The committee is headed by Governor Mala Buni of Yobe State. Mr Buni was the national secretary of the APC until his election as governor in 2019.

The caretaker committee is to conduct the party National Convention to elect new leadership for the APC within six months.

The NEC also ratified the APC governorship primary in Edo State, which produced Osagie Ize-Iyamu as the party’s governorship candidate.

Apart from President Buhari, the NEC meeting was attended by the Vice President, Yemi Osinbajo, state governors and some members of the NWC.

If the NWC members head to court over the issue, they could have the dissolution upturned, embarrass Mr Buhari and plunge the ruling party into further crisis.

But it appears the president understands this and would not wait for such to happen.

PREMIUM TIMES gathered that Mr Buhari has reached out to governors of the states where the NWC members hail from, requesting the governors to put pressure on the intransigent party officials not to seek redress in court or take further action on the issue.

Most NWC members are usually nominated by state chapters of the party before they are elected into the NWC during the party convention. So, in most cases, the NWC members owe some degree of loyalty to their state governors (in the states where APC is the ruling party).

More so, they rely on their governors for patronage.

Two of the sacked NWC members, one from the North, the other from the South, told PREMIUM TIMES they have received a call from their state governors who told them to withdraw from “the group”.

The governors are claiming that the president is on their neck. He wants them to talk to the officials of the sacked NWC not to embarrass the party and to remind them of the resolution that APC members should not be taking the party to court and that they would be other opportunities for them to serve the party in the future.

“It is too early to say they shouldn’t have put my name (on the Thursday statement expressing the position of the sacked NWC members), but I am not too keen because I have been called by my state governor who told me the president asked him to get in touch with me,” a member of the sacked NWC told PREMIUM TIMES, Thursday night.

Presidential spokesperson Femi Adesina did not respond to calls and a text message on Friday.

The APC was thrown into a fresh leadership crisis when the Court of Appeal a few days ago upheld the suspension of Adams Oshiomhole as the party’s national chairman.

A faction of the party which is loyal to the Minister of Transportation, Rotimi Amaechi, has been engaged in an intense and devastating power-tussle with a faction loyal to the former governor of Lagos State, Bola Tinubu, who is regarded as the national leader of the party.