The tanker driver, who was conveying diesel to a company in Arepo, veered off the Lagos-Ibadan Expressway and lost control of the vehicle. 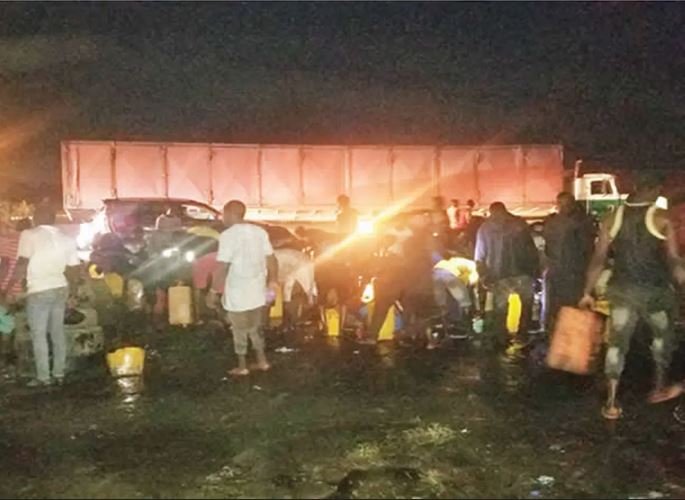 A tanker which was laden with diesel, on Thursday, fell and spilled its content on the road in the Arepo area of Ogun State.

According to PUNCH Metro, it was gathered that the tanker driver, who was conveying diesel to a company in Arepo, veered off the Lagos-Ibadan Expressway to connect to his destination and lost control of the vehicle.

An eyewitness, who gave his name simply as Kehinde, said the vehicle was stopped by an abandoned metal on the earth road.

“The driver was going to a company in Arepo when the tank fell off the truck head after the vehicle hit a metal that stopped it from going to the expressway. If not for that metal, the truck would have entered the expressway and cause a serious accident,” he said.

At the scene of the crash, PUNCH Metro observed that many residents were taking advantage of the situation to scoop diesel as it was spilling on the road.

Some other persons suspected to be the owners of the diesel were seen trans-loading the remainder content into another truck with number plate AKD 584 XC, while some of the residents were seen fighting themselves over the content.

When asked if they were not scared that an explosion could occur, one of the residents, who gave his name simply as Abdul, said, “Nothing is working in this country and people are hungry and there is no money. An explosion will not occur.

“I have scooped one bowl of diesel and I am here to take another one. The incident happened around 6pm. The driver wanted to drive up the road, but the truck rolled back and as it was falling, we made an attempt to put a breaker on the tyres but the vehicle climbed it.”

Emergency responders at the scene included officials of the Isheri station of the Ogun State Fire Service and police personnel from the Warewa Division.