This threat was contained in a statement titled, 'Akpabio to sue Joy Nunieh for defamation, denies ‘false allegations’. 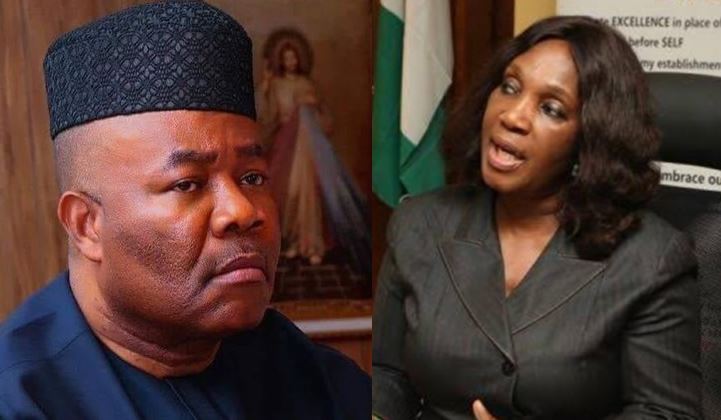 According to The PUNCH, the Minister of Niger Delta Affairs, Senator Godswill Akpabio, has threatened to take legal action against the former Managing Director of the Niger Delta Development Commission, Ms. Joy Nunieh, for allegedly defaming his character.

This threat was contained in a statement titled, “Akpabio to sue Joy Nunieh for defamation, denies ‘false allegations’,” signed by his special assistant, Anietie Ekong, in Abuja, on Friday, said the minister has already instructed his lawyers to seek legal redress.

Ekong described Joy’s allegations against his principal as tissues of lies noting that at no time did the minister make advances towards her.

The statement read in part, “The Honourable Minister’s initial attitude was to allow his lawyers and the judicial system vindicate him of the false allegations against him, but he is compelled to react to some of the wayward allegations levied against his person by Ms. Nunieh, especially the one bothering on sexual harassment.

“To start with, let it be known that there is no scintilla of truth in all the allegations peddled around by Ms. Nunieh. They are simply false.

“For the records, the Honourable Minister, Senator Godswill Akpabio, CON is happily married and contented with his wife. Together they are blessed with children, four (4) of whom are young women.

“The Honourable Minister is an avid believer of the Affirmative Action and that was visible in the appointments he made as a two (2) term Executive Governor of Akwa Ibom State between 2007 and 2015.