A popular Nigerian car inventor from Imo state has passed away after a brief illness. 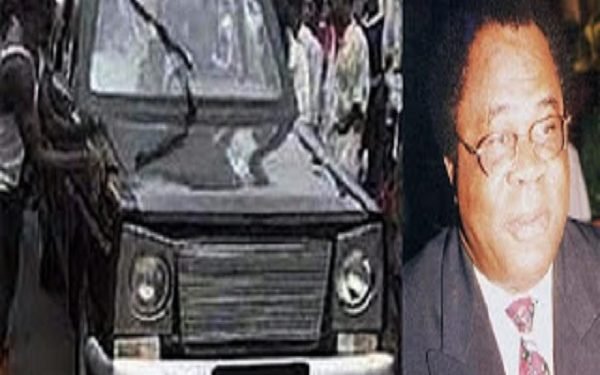 Dr. Ezekiel Izuogu of Akokwa
Nigerians are mourning the death of renowned scientist and inventor, Dr. Ezekiel Izuogu of Akokwa clan in Ideato North Local Government Area of Imo State.
The African foremost car inventor and manufacturer died on Saturday after a brief illness.
Before his death, Izuogu once contested for Imo Governorship Election. He was a BoT member of the All Progressives Party (APC).
In 1997, the brilliant lecturer at the Federal polytechnic Nekede designed and developed the Izuogu Z-600, the first African indigenous manufactured car.
The car was described by the BBC as “the African dream machine as 90% of its parts were sourced locally. At a projected sales cost of $2000, it would have taken the world by storm and become the cheapest and most affordable car on earth.
“With mass production planned under Izogu Motors plant in Naze Owerri, the prospects of an industrial revolution in Igbo land and Nigeria, was in the making.”
The car was equipped with a self-made 1.8L four cylinder engine that got 18mpg and allowed the car to achieve a top speed of 140 km/h.
Front Wheel Drive (FWD) was chosen over Rear Wheel Drive (RWD) because a transmission tunnel, which RWD would require, would be more expensive to fabricate.
The late General Sani Abacha set up a 12 -man panel of inquiry made up of professionals to ascertain the road worthiness and authenticity of the car.
After several days of probing, the committee gave Izuogu’s car a clean bill of health, recommending some of the bumps on the body of the car be smoothened.
It is worthy to note this was five years before India built its first car known as the Indi.
At a well- organised unveiling ceremony, which had General Abacha represented by Oladipo Diya, over 20 foreign ambassadors and thousands in attendance, the Federal Government promised a grant of N235 million to Dr. Izuogu.
An excited Izuogu waited for the grant till he died.
In 2006, South Africa invited Dr. Izuogu for a presentation on the car in the presence of several world class engineers.
The nation invited the inventor to set up a plant in South Africa and begin the production of the car.
Izuogu reluctantly agreed, though he wasn’t happy benefits of employment generation will be lost on the locals of Naze and human resources environment.
On March 11, 2006, at about 2.00 am, twelve heavily armed men broke into Izuogu’s factory in Naze, Owerri North LGA and carted away various machines and tools including the design history notebook of Z-600, the design file Z-MASS, containing the design history for mass production of Z-600 car and mould for various parts of the car.
He said: “It seems that the target of this robbery is to stop the efforts we are making to mass-produce the first ever locally made car in Africa.
“Other items stolen included locally produced timing wheel, locally produced camshaft, locally produced crankshaft, locally produced engine tappets, all 20 pieces each.
“Also stolen were ten pieces of locally produced Z-600 engine blocks, ten pieces of locally produced pistons, four pieces of engine block mounds, four pieces of top engine block moulds, ten pieces of engine fly wheel and two pieces each of rear car and front mudguard moulds.”
The inventor regretted not only did he lose over one N1 billion but also about a decade of time and energy it took to design and produce the moulds.
He regarded the incident as a national economic disaster, stating Nigeria had lost a technological and intellectual property.
The setback and governmental attitude frustrated Izuogu and his dream died.
President Muhammed Buhari through Femi Adesina, his media and publicity aide, also mourned the great icon as a “trail-blazing innovator, a well-respected academic and gifted engineer” as he asked God to grants his son an eternal rest.
The president also said that the man was also a very important political figure apart from the great innovation with a recognisable leadership in the country’s political landscape.
Top Stories