The clip shows Fabio chatting with Guilherme when his wife, Nataly Mega, who has just come out from a shower, scurries across the room with nothing but a towel wrapped around her head. 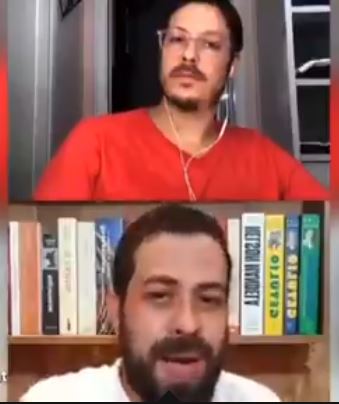 A journalist was left red-faced when his naked wife suddenly walked past behind him during a live-streamed discussion with a former presidential candidate.

TV host and actor Fabio Porchat, 37, was talking to Brazilian politician Guilherme Boulos, 38, on his mini-series "Politics Live" on Instagram when his other half appeared.

The clip shows Fabio chatting with Guilherme when his wife, Nataly Mega, who has just come out from a shower, scurries across the room with nothing but a towel wrapped around her head.

She appears to have noticed the video call as she bends down and tries not to be caught by the camera – but fails miserably.

But Guilherme realises and couldn't help but mention it, saying: "Somebody's walking past naked."

Fabio, trying to ignore his wife, turns around and says: "Everybody saw you."

Nataly replies: "Could you see?"

"Obviously they can see, totally, even Boulos saw," Fabio adds while Guilherme bursts into laughter on screen.

The incident happened earlier this month, on July 3, but only recently went viral across other social media platforms.

Activist and politician Guilherme was the presidential candidate for the left-wing Socialism and Liberty Party (PSOL) party in 2018.

He joked about the incident on Twitter, saying: “They speak about me, but it was Nataly who invaded the livestream.”

Nataly and Fabio have been married in 2017. She is a producer on the Porta dos Fundos YouTube channel which her husband helped set up in 2012.

She studied at the University of California while her husband has worked as a prominent voice actor in Brazil, working on the dubbing of films such as Disney movie "Frozen" and The Angry Birds Movie.

Click on Daily Star UK to watch the video