Meet The Oyinbo Man That Can Cook Egusi Soup (Photos)


A white man has thrilled many people after it was discovered that he can cook egusi soup. 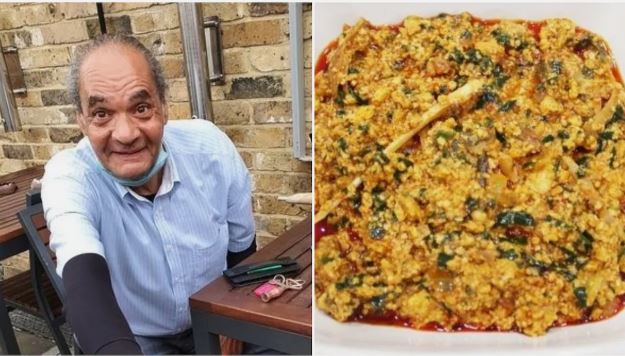 Daniel can cook egusi soup
A 67-year-old white man, Daniel has been hailed on social media for perfecting the act of cooking egusi soup.
Daniel, who has never been to Nigeria has a father who is Nigerian and from Ijaw.
Nigerian journalist who goes by the name Okwoche on Twitter made the revelation after coming in contact with him.
According to the journalist, the man has never come to Nigeria. His dad died 50 years ago. He said his dad was skilled in cooking egusi and since his death, he has been doing this same thing.
Daniel, however, eats his own egusi soup with parsnips and strawberries. Despite the fact that his wife died 15-year-ago, he still buys her flowers and wears his wedding ring.
Below is Okwoche's tweet:

Met Daniel today. He's 67 years old. His dad is #Ijaw, his mom English. He's never been to #Nigeria before but remembers his dad, who died 50 years ago, cooking #Egusisoup! Since the he has been cooking egusi. But he eats it with parsnips and strawberries! pic.twitter.com/NKXWyx5xbI