The APC has expressed displeasure over the car gifts to the serving judges by the Rivers state governor. 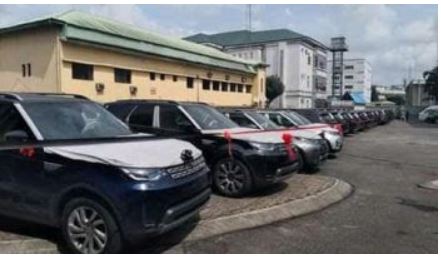 Your Car Gifts To Judges Were  Unnecessary, APC Blasts Wike

The All Progressives Congress, APC, has raised concerns over what it called needless donation of operational vehicles to serving Judges at a time of massive unemployment and retirees unpaid their gratuities.

The party said that across the country, sharp criticisms are trailing the Rivers State Government over its action.

APC in a press statement signed by its Spokeman, Ogbonna Nwuke, a former member of House of Representative and ex- Commissioner for Information explained that it had nothing against the Judiciary or Judges who are beneficiaries of car gifts.

“We are nonetheless appalled by the unnecessary and uncharitable remarks credited to the Rivers Governor and also worried by the nature of the condescending lecture that Governor Nyesom Wike presented to the Judiciary at the occasion. Rather than concentrating on the assignment of presenting vehicles to deserving judges, the Governor spent valuable time soliciting".

APC wondered: “What kind of cooperation was Governor Wike sueing for in his rigorous speech? Is it necessary for a man who has presented gifts to another to recount in public, how much he has done for a beneficiary? Such an antic which allows one to act as a Town Crier when showering gifts on another is completely non-African.”

APC accuses Wike of having started spinning a dangerous web which would form the political template for 2023.

The party challenges the Governor to explain his motive for seeking collaboration and understanding on the part of the Judges now that he has fulfilled what he described as his promise.

APC regretted that “Interestingly, there are teeming youths who should be put to work throughinvestments which have the tendency of stimulating the State’s comatose economy. Surprisingly, the administration has failed to listen. Thousands of Civil servants have retired from the service. Yet, it pleases the Government to use the services of retirees under a contract that enables them to serve as Permanent Secretaries, while vacancies which have created avenues for employment are not filled.

“Thousands of retirees have had no access to the payment of their pensions and gratuities. The records show that these men and women who served the State diligently have been left to die while their families and other dependants suffer. Yet, it would appear from the body language of the Governor, that the Rivers State Government does not care about the welfare of these senior citizens.”

The party also regrets the helplessness the EFCC as there exists a perpetual injunction which debars them from investigating financial dealings of the Rivers State Government.

APC urged the Judiciary not to be swayed by the dummy of friendship that is being sold to them, saying ”It is fake. In the interim, we urge the Federal Government to enforce the first line charge for both the State Judiciary and the State Legislative in order to put an end to endless manipulations by those who exercise executive power.“