A woman who was driven out of her matrimonial home by the parents of her husband for having children born with blue eyes has told her story. 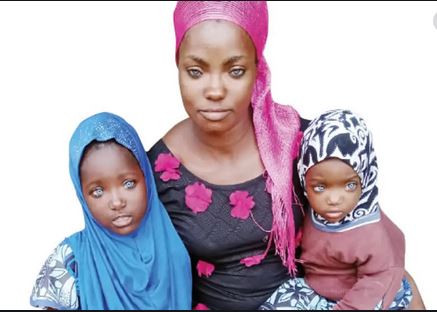 Mrs Risikat Abdulwasiu with her kids

Mrs Risikat Abdulwasiu is a 30-year-old mother of two who was driven out of her matrimonial home by the parents of her husband for having children born with blue eyes. She shares her story with TUNDE OYEKOLA

My name is Risikat Abdulazeez.

What is your academic qualification?

I attended Alore Primary School for my primary education. I also attended Okelele Junior Secondary School and Amule Secondary School in Ilorin (Kwara State). I reached the final class (JSS3) but I didn’t sit the examination. I did not take the West Africa Senior School Certificate Examination and National Examination Council exam because my parents could not pay the fees.

What is the name of your husband?

His name is Abdulwasiu Oloye. He is a vulcaniser.

How did you meet him?

We met in the area where my medicine shop was located. We underwent courtship for some time before we got married.

Were you properly married?

We did a proper wedding in the Islamic way, not that I was pregnant for him during our courtship. Before he married me, he was a frequent visitor at my parents’ house and he exhibited good character before I agreed to marry him.

You have blue eyes. How did that happen?

When I was born, my parents discovered that the colour of my eyes was blue, but they didn’t do anything about it since it did not affect my vision.

Did your classmates make jest of you or embarrass you at school because of your eyes?

Yes. I faced a lot of embarrassment because they used to ridicule me by calling me a strange human with strange eyes (oloju to yato) because the colour of my eyes was different from theirs. They used to make jest of me. I used to report them to our teachers in school and I also told my parents at home. Later, my parents took me to the University of Ilorin Teaching Hospital to complain to the doctors about my eyes. The doctors examined me and said that my eyesight was normal and that there was nothing wrong with my eyes. Doctors at the hospital even took photographs with me after the test.

Did your husband not notice that you had blue eyes when he was dating you?

He knew I had blue eyes. He didn’t complain about them.

Are you the mother of Kaosara, the little girl who also has blue eyes?

Yes, my first daughter is Kaosara. She is about five years old and she was born with blue eyes. It (having blue eyes) is natural; God made it to be so. She has not started school because I have no money to put her in a nursery or primary school. I hope to enrol her in a public school when she attains the school age.

Do you have other children?

I have two other children. The children that came after Kaosara were twins – Hasanat Kehinde and Taiwo. Hasanat is a girl who also was born with blue eyes. But Taiwo was a male with (normal) black eyes. Unfortunately, Taiwo is now deceased. They (twins) were born two and half years ago.

How did your son die?

How old was he when he died?

He died a few months ago; he was about two years old when he died.

How does it feel having children with blue eyes like you?

I don’t feel bad about their blue eyes because I believe they are hereditary. They inherited them from me.

What kind of reactions do you get from people about your children?

There has been no adverse reaction from people about the colour of their eyes. Since they have seen me, they are used to it. My children also have no problem with their playmates; they mingle freely with them in the area where we live.

Has anyone told you there could be some science behind the colour of your eyes?

I don’t know. Doctors at the University of Ilorin Teaching Hospital only told me that they are normal. They didn’t tell me that there is any science behind it.

You were said to have been driven out by your husband because you had children with blue eyes. When did this happen?

Has he visited you since you left his house?

He comes occasionally but would not give me and the children money. When I was in his house, he didn’t give me money for food. It was my parents that used to feed us. My mother would bring foodstuffs from her house and would also give us money. That is how we have been living. But I want to tell you that my husband and I are not fighting. It was his parents who said they could not live with my children having blue eyes. They forget that those children were created by God who made them have blue eyes.

How difficult has it been taking care of the children since you moved out of your husband’s home?

It has not been easy because I have no means of sustaining myself and the children. The medicine shop established for me by my parents has been closed because we used the proceeds to feed when I was in my husband’s house since he failed to feed us. However, my parents whom I live with are the ones taking care of us. They are providing food and clothing for us.

Do the children ask about their father?

Yes, they ask occasionally. Their father also comes to visit them and when he visits, he only buys beverages for them. But, he doesn’t give me money to feed them.

What do you tell your children when they ask about their father?

I usually tell Kaosara that her father is well.

What would you like her and her sister to become in future?

God who created us has plans for every individual. I don’t have any specific thing (planned) for her and her sister. I only wish that they would become great in future.

If your husband’s parents come to apologise and beg your family, would you reconcile and go back to their house?

No, it is no longer possible, I won’t go back. I’m not ready to marry him again. It is too late.

Are you going to remarry?