A slay queen has found herself in serious trouble after allegedly stealing a gold chain. 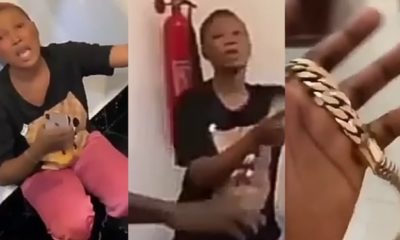 The slayqueen was disgraced in public
An Instagram slay queen has been given the disgrace of a lifetime by a client after she allegedly made away with his gold chain during a visit.
In the video, the lady could be seen begging some guys to have mercy on her as they stretched out wires and belt, ready to unleash their wrath on her.
Her client had allegedly called his guys to help him deal with the girl. The client also mentioned how she wrapped his gold chain in a paper and hid it with intention of sneaking it out.
Speaking further on the incident, the client also noted that he brought her home for a minor deal, only for her to steal his gold chain.
Watch the video below: