A retired soldier has been caught on tape brutalizing a policewoman in Lagos state. 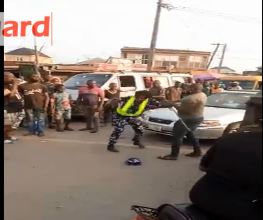 The soldier beating the policewoman in public
A policewoman has been flogged and beaten by a retired soldier in Lagos state during an altercation between the two.
It was gathered that the incident happened on on Wednesday (8/12/2020) while the policewoman was controlling traffic at Ilemba Hausa, Lagos.
The man refused to stop even as people cautioned him saying: “soldier nah woman ooo”.
The incident attracted a large crowd.
Watch video below:
Top Stories