It was raining lightly on the morning of August 6, when eight-year-old Faruk Abubakar was murdered just outside his parent’s house in Tudun Fera area of Jos. 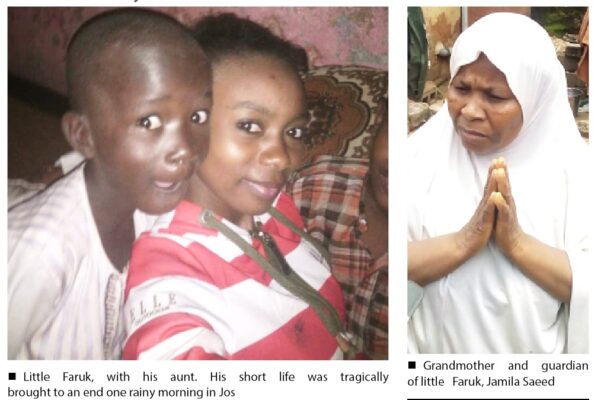 Faruk Abubakar, 8, was sent on an errand to a nearby house but was intercepted, murdered and his blood drained. No one knows by who or for what reason.

It was raining lightly on the morning of August 6, when eight-year-old Faruk Abubakar was murdered just outside his parent’s house in Tudun Fera area of Jos.

He was stabbed in the neck and apparently, his blood was drained out. His small body was found in a nearby alley, 150 metres from his home.

That Thursday morning, at about 7:30 am, his grandmother, Jamila Saeed had called him and sent him to buy livestock feed from the neighbours’ as he was in the habit of doing before. The N500 note she sent him with was still in his pocket when his corpse was found about 30 minutes after he had left home.

“That day was not the first he would be sent to buy livestock feed for me,” she said. “I do send him or any other person available at home.”

The distance from her house to where they sold the feed was no more than 350 metres. But that morning, she realised that her grandson was taking too long to return. She wondered if he had lost the money and was afraid to return home so she went out to look for him.

Jamila soon realized that Faruk had stayed longer than was normal and thought that perhaps he had lost the money and might be afraid to return home. She went out to look for him but couldn’t find him. She had no idea he had been murdered by then.

“I returned home with peace of mind and never imagined something terrible of that magnitude could have happened to Faruk, “ she said.

That peace of mind did not last long because soon after, the community leader arrived with a member of a vigilante carrying Faruk on his back.

“They started telling me that life is all about destiny and patience. That my grandson, Faruk had gone for good,” she said.

The men had found Faruk’s corpse just 150 metres from his house with a cut on his neck but strangely, with no pool of blood.

The loss shocked Jamila so much, she said, it was unlike anything she had experienced before. Now, all she has are regrets and a deep resentment for little Faruk’s murderers.

“It is barbaric and wickedness of the highest order, especially to a fellow human being and to an innocent kid for that matter,” Jamila Saeed said.

When the news broke, the Tudun Fera area was thrown into shock. Neighbours trooped to confirm the news. Nothing like that had happened in that area before.

When the news reached Faruk’s father, Abubakar Dan Madiga, he was devastated but put it down to destiny. But when he saw his son’s corpse, he was shocked as to why anyone would do something like that to a child.

“At first, I wasn’t disturbed but when I saw the nature of the murder, I almost fainted because it was a brutal killing which he didn’t deserve. I have never cried like I cried that day,” he said.

No one knows exactly why Faruk was murdered or by who but his father has a theory.

“Those who killed Faruk know why they killed him. All I know is that I have no grudge with anybody but it is obvious that the culprits killed him to collect blood for something else,” he said.

“If you see how they killed him, you would know that they killed him to collect his blood. Added to that, there wasn’t blood on the ground where the body was dumped. Even the money that he was sent with was found in his pocket. So, they only collected his blood. He is still a small boy and therefore, you can’t say he (Faruk) is having a problem with someone,” Dan Madiga said.

Heartbroken and sad, Dan Madiga said he is leaving everything in the hands of God. He even asked other parents to be more vigilant around their children.

“Those who are responsible for this dastardly act would not go free,” he said. “The Almighty will one day expose them. We will continue to pray and wish Faruk Jannatul Firdaus.”

A neighbour and parent, Nafisa Sani, described the murder as terrible and said it has caused fear in the neighbourhood.

“Since the day of the incident, I have not allowed my children to either go out or to send them on errands due to the fear of the unknown,” she said. “I used to send them out to buy things for me but now I have started going out myself. We cannot afford to be losing them easily.”

Yahaya Musa, a parent and community leader in the area, also shared the same feeling with Nafisa.

“This kind of act has never happened in the community,” he said. “It is very strange and that is why it is worrisome. Whoever committed this act we pray for God to expose him.”

He said they are even more shocked that the incident happened, not at night, but in the morning and not far from the victim’s house. However, the light drizzle that morning had kept most people off the streets, giving the criminals the chance to carry out their act without witnesses.

Yahaya, however, advised parents not to be careless about their children and be careful when sending them out be it in the morning or at night.

“Whenever I see a small child around in the community, I always question them and ensure that they return safely to their homes,” he said.

The state police spokesperson, Assistant Superintendent Ubah Gabriel said the incident was not reported to the police headquarters but he would confirm from the District Police Officer of the area.

For Faruk’s grandmother, Jamila, it seems they are content with seeking divine justice for their loss. Faruk is the fifth born in the family and died with the hope that this year, when schools resume, he would be enrolled to start his primary education.

“I will remember Faruk for many things. He is jovial, playful, and respectful, not only to people in the house but also to outsiders. Whoever he sees, he greets them. Only God will judge this,” she said.

Now, her days are filled with grief and regret.

“If I had known Faruk would not return home alive, I would have asked him not to even step out of the house,” she said. “I am his grandmother but he is like my own child. I feel so bad.”