In a statement by the church, the Pastor had, in the prophecy, said the elections would end in court. 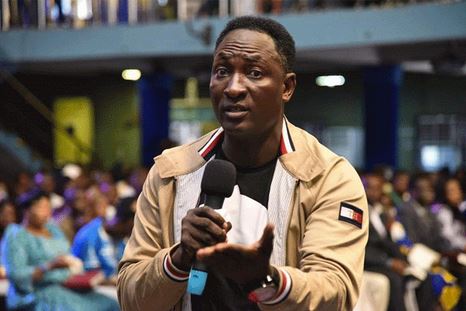 According to Vanguard, few days after Tribunal sacks sitting Governor of Bayelsa State, Duoye Diri and ordered that a fresh Governorship election be conducted,  Prophet and Founder of Christ Mercyland Deliverance Ministry, Jeremiah Fufeyin has been trending on social media, stating that he  accurately predicted the outcome as inspired by the holy spirit.

In a statement by the church, the Pastor had, in the prophecy, said the elections would end in court.

According to the church, these were his words back in November 2019: “The same way I revealed the secret on the postponement of the presidential election, it’s the same way I’m telling you; they will end up in court.Just like the popular aphorism goes “internet never forget” a throwback video clip of the Nigerian Clergyman gave a prophetic assertion on Bayelsa Election  months before the elections last year, his prophetic verdicts are now playing out and it’s only appropriate.”

In the trending clip, the church stated that the man of God said emphatically that only the court can determine who seats on that seat, he sees a lot of commotions and legal battles.

It said, “However, as events unfolds following the Supreme Court sack of The APC winner Chief David Lyon days before his swearing in, Duoye Diri of The PDP was sworn in as the State Governor May 29, 2020. Fast forward to August 17th 2020 Tribunal sacked Governor Duoye Diri and ordered a fresh election.

“All these legal fall-outs as earlier predicted by Prophet Fufeyin has caused Nigerians to celebrate the popular warri prophet who is not only known for his many accurate prophetic assertions but also widely known as one of the biggest philanthropist in recently times amongst African Clergymen as he recently dishes out Billionaires of Naira to support lockdown Nigerians and also help the Government fight hunger-virus during the peak of the coronavirus lockdown.”