Drama As Manager Is Caught Pants Down With His Junior, A Married Woman


The manager was allegedly caught luring his colleague to sleep with him in her matrimonial home. 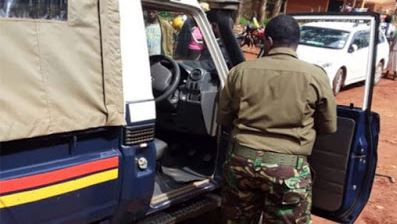 Drama As Manager Is Caught Pants Down With His Junior, A Married Woman

Police in Kakamega County, Kenya have arrested a middle-aged man accused of sexually preying on his female juniors at work.

The manager of Frodak company, which has been contracted to offer cleaning services at Butali Sugar Mills Limited, was allegedly caught luring his colleague, Elemina Katam, to sleep with him on Thursday afternoon.

The top administrator had gone to the woman’s house in Malava, when her husband was away, police said.

“He is using his position to frustrate women at the company. Every time he approaches a female worker that he is interested in, he often tells her to sleep with him or else she loses her job,” alleged Elemina.

“The first time he made advances at me, I rejected him. He, however, kept on persisting to the extent of coming to my house when my husband was away.

There was this day he had come to my residence, and even accessed my bedroom. When he was in the process of attempting to undress me, my husband arrived.

My spouse asked him to commit in writing that he will never harass me sexually again, which my manager did.

“However, recently, he started pestering me again, saying he wanted to see me. I asked him to come to my place on Thursday afternoon, which he did.

While in the house, he seduced and ordered me to sleep with him. I refused. He, however, used force to pull me to the bed, forcing me to scream.

Luckily, my husband, who had returned home from visiting his parents, found him in the house.”

Elemina’s husband, Tom Lando, told police that the suspect had, in previous occasions, sexually preyed on his wife without success.

“After failing to entice my wife to sleep with him, he sent her on a 3-month mandatory leave. Yesterday (Thursday, August 20), he told my wife that he wanted to see her.

Because my partner feared losing her job, she allowed him to come over. While he was attempting to pin her to the bed, I arrived and forced him to stop what he was doing. I am now urging police to charge the suspect with sexual harassment,” said Lando.

However, a section of staff members at Frodak company allege that Elemina and her husband trapped the suspect so that they could extort money from him.

“For a while now, the alleged victim has been targeting the manager for extortion. She recently said she would obtain Ksh100,000 from him by all means,” said  Felistus Wasula, an employee of Frodak.

Elemina’s relative, Boaz Wanami, said culturally, the suspect should pay a fine of three cows, several sheep and Ksh200,000 for “attempting to sleep with a married woman in her house, an act which never goes unpunished according to Luhya customs”.

The suspect, who was badly beaten before being handed over to police Thursday evening, is being held at the Malava Police Station.