UPDATE: The Third Victim Of Lagos Helicopter Crash Has Died


The spokesperson for the Accident Investigation Bureau, Mr Tunji Oketunmbi, confirmed this on Friday. 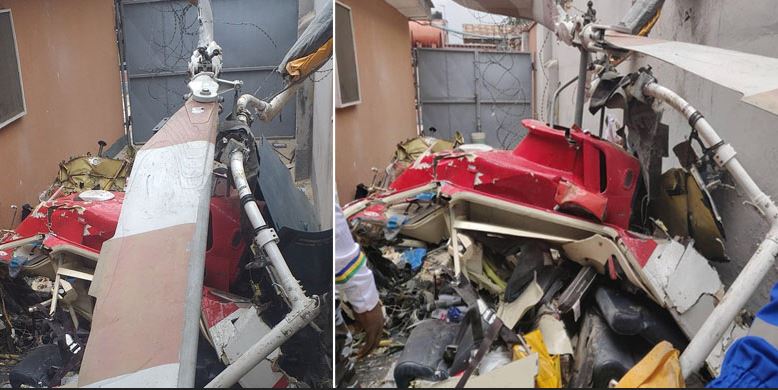 Scene of the crash

According to The PUNCH, the third crew member in the helicopter that crashed into a building at Opebi, Lagos State, has died.

The spokesperson for the Accident Investigation Bureau, Mr Tunji Oketunmbi, confirmed this to The PUNCH on Friday.

He said, “I am already telling you that. I confirm to you that the third person has died.”

With this, all three crew members in the helicopter are dead.

Earlier, a Bell 206-3 with registration number 5N-BQW belonging to Quorum Aviation crashed into a wall between two buildings at 16 A Salvation Road, Opebi, Ikeja at 12:30 pm.

According to a press statement from the Accident Investigation Bureau, the chopper was bound for Lagos from Port-Harcourt.

AIB in its press statement also promised to commence an investigation into the accident which had three passengers aboard.

Quorum Aviation had confirmed that those involved in the accident are its crew members.

It added that two died while the third crew member had been placed in the Intensive Care Unit of the Lagos State University Teaching Hospital.

The third victim did not make it out alive, a source at LASUTH also confirmed to The PUNCH.

An earlier statement from the chopper did not give the names of the victims.

Part of the statement read, “We have been made to understand that nobody in the building, nor in the vicinity was injured for which we are grateful.

“We hereby express our heartfelt condolences to the families of the crew who lost their loved ones in this tragic accident.”