A peace deal between once enemy countries - Israel and UAE - has seen a plane from Israel land in UAE. 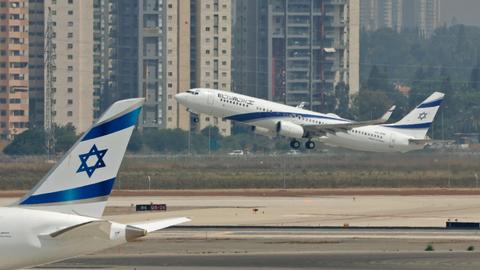 First flight from Israel lands in the UAE
The first official flight from Israel to the United Arab Emirates landed on Monday after the two countries brokered peace
The El Al airliner made the three-hour trip, carrying a delegation of Israeli and US officials as it crossed Saudi Arabian airspace, normally blocked to Israeli air traffic.
The UAE becomes only the third Arab country in the Middle East to recognise Israel since its founding in 1948.
On Saturday, the UAE repealed a law boycotting Israel which had been in place since 1972, and earlier this month the two countries opened direct telephone services for the first time.
The agreement to normalise relations – brokered by the US – was made public in a surprise announcement on 13 August.
Flight LY971 – numbered to represent the UAE’s international dialling code – carried delegates including Donald Trump’s son-in-law and senior adviser Jared Kushner and Israel’s National Security Adviser Meir Ben-Shabbat.
Mr Kushner led secret talks which resulted in the agreement between Israel and the UAE, a federation of seven Arab monarchies in the Gulf, including Dubai, The BBC writes.
Speaking to the media after landing in the UAE capital Abu Dhabi, Mr Kushner described the deal between the countries as a “historic breakthrough” and said it was a “tremendous honour” to have joined the flight.
“What happened here was three great leaders came together and they started writing a new script for the Middle East. They said the future doesn’t have to be predetermined by the past,” he said
The return flight will be numbered LY972, after Israel’s international dialling code.
Top Stories