It will be recalled that pastor Adeboye met with President Buhari behind closed-door on Monday. 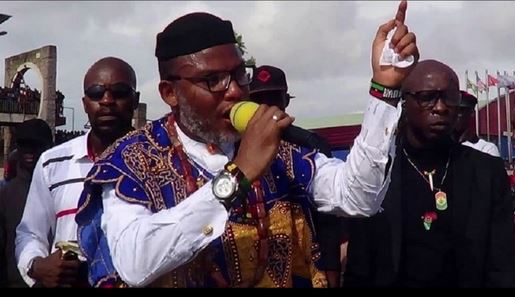 The controversial leader of the Indigenous People of Biafra, IPOB, Nnamdi Kanu, has made claims about Pastor Enoch Adeboye’s refusal to speak with the press after his meeting with President Muhammadu Buhari on Monday.

It will be recalled that pastor Adeboye met with President Buhari behind closed-door on Monday.

And after the meeting, the revered Christian leader shunned the eagerly awaiting State House correspondents as he made his way out of the Presidential Villa.

Although details of the meeting have not been made available to the press till this moment, there are indications it was in connection to the controversial Companies and Allied Matters Act, CAMA, which the President signed into law on August 7, 2020.

But Kanu is claiming that what the Pastor saw in Aso Rock his mouth could not speak.

“The General Overseer of The Redeemed Christian Church Of God Pastor E.A Adeboye declined to speak with state house correspondents after his meeting with President Muhammadu Buhari on Monday,” he wrote on Facebook.

“Common live interview they cannot do. Deception in the name of Christ.

“I challenge Adeboye to tell the world if he met the old brutal dictator Buhari or somebody that looks like him,” he claimed.