A man of God who fell to the works of the flesh has apologised profusely to his wife again. 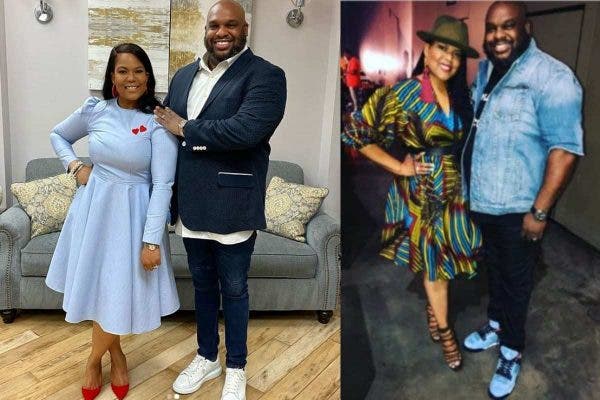 US Pastor John Gray and his wife, Aventer Gray
A popular pastor in the US, Pastor John Gray has issued a fresh apology to his wife, Aventer Gray, and his church congregation following new reports that he is cheating on his wife.
While tendering the apology, he revealed that he is now in therapy as he promised to change for good.
This comes just after a year the pastor was exposed by his wife for cheating on her.
He apologised after, reiterating that there was no baby from the affair.
A year after that, a new video emerged from his alleged side chick, with a footage of his son, as the young lad witness the pastor degrade his wife before the side chick.
He is now apologising again, as he at alone on a darkened stage to issue an apology to his wife and his Relentless Church congregation.
He said;
“I just want to take a moment to say to you Relentless Church, to the body of Christ, to those who have looked to me as an example of leadership and pastoral oversight, I want to take this moment to tell you I’m sorry,” Pastor John Gray said during his lengthy sermon last Sunday.
“I’m sorry for the areas of my life that I left unattended, that I was apathetic about. The areas where I have treated the calling of God, the grace of God and the hand of God casually in my life. For every area of behavior that has dishonored the holiness of God, I want to tell you I’m sorry.”
”Church is not a game. Pastors are held to the highest of standards. Moral integrity. Character when no one is looking. Fidelity and faithfulness in marriage. And for me, not submitting to process, not staying accountable, and not utilizing the voices available to teach me the tools, have caused me to make bad decisions.”
”And I want to make it very clear again that no one carries that but me.”
“As I’ve said to my wife, I say to her now in the moment, Aventer I am sorry for the pain that I have caused you. And my prayer is that the life I live from this moment will be one worthy of the love that you have extended and that our family receives from. I am grateful for you, for our children and I pray that God would restore the joy that we had in the days when we would drive around the city dreaming.
You know more than everyone else the areas of pain that I’ve carried for years. The horrific, self-fulfilling prophesies. That you told me stop confessing those things. But I believe that this moment had to come so that God could make me the man that I need to be. But I’m sorry for that pain that I’ve caused. You don’t deserve it. You’re an amazing woman of God and I love you.
And I will face me so that the man that comes out of this moment will be able to honor you in a way that I never have before.”
Pastor Gray – who pastored for several years at Joel Osteen’s Lakewood Church in Houston – revealed he has been undergoing extensive therapy for a while, both with his wife and individually.
Top Stories