#BBNaija: 'I Believe Erica Jazzed You' - Vee Tells Laycon As He Makes Excuses for Her (Video)


While together in the kitchen, Vee has opened up to Laycon as he tried to make excuses for evicted housemate, Erica. 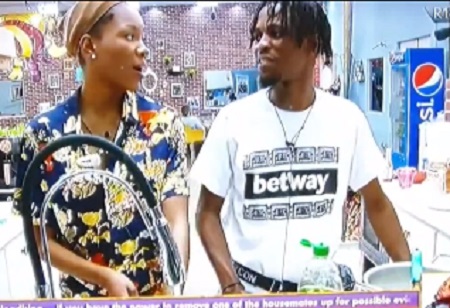 Vee and Laycon
Big Brother Naija lockdown housemates, Vee openly told Laycon that she feels Erica jazzed (charmed) him.
It all happened after the duo were spotted in the kitchen having a discussion about disqualified housemate, Erica.
Laycon had told Vee that he found Erica's earrings in the Head of House lounge, and Vee who has never hidden her dislike for Erica, showed no interest to talk about her.
According to Vee, she doesn't see why Laycon talks about Erica because he ''deserves better''. She went on to say ''God forbid'' and added ''You can't bring any stupid girl to me and say you like her"
Laycon then asked Vee what she doesn't like about Erica and she responded saying;
''She doesn't know how to think for herself. She is weak, hers was bad''
When Laycon tried to put up a defense for Erica that everybody is ''weak'', Vee responded
''You will always make up an excuse for this girl and that is why I believe you were jazzed. You were jazzed. Now you have been vindicated. You have been vindicated. Yes I said it. Thank you lord''
At some point, Vee started choking due to the smell from the Onion she was cutting. She went on to 'blame' Erica for what had happened '' She can hear me'' ''Oluwa oo!'' Vee said
Watch the video below: