The protesters appealed to the state government to grant their request to observe public holidays. 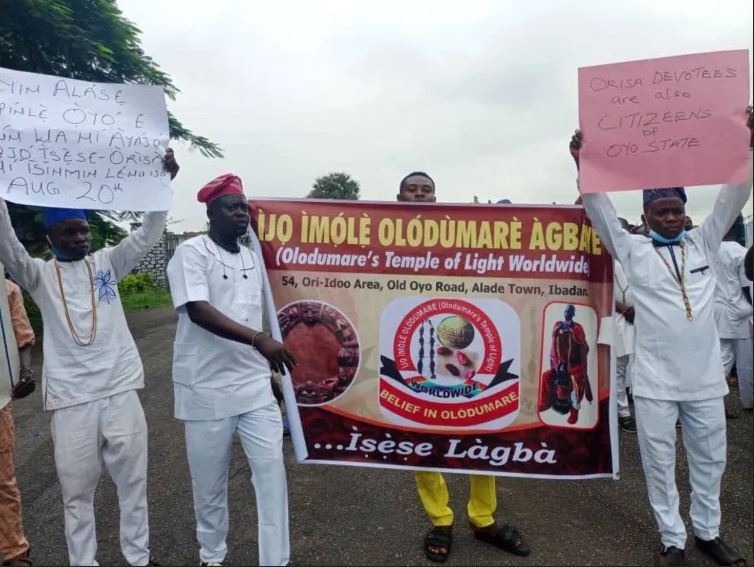 Traditional worshippers under the aegis of Traditional Religion Worshippers’ Association, Oyo State chapter, Tuesday, staged a peaceful protest over what they termed discrimination against the body by the state government.

The worshippers, who staged the protest at the front of the Oyo State Government Secretariat complex, carried placards with various inscriptions as: “Stop discrimination against traditional religion,” Oyo is a secular state, stop discrimination,” and others.

They also appealed to the Muslims, Christians and others to join them in appealing to the state government to grant their request of granting public holidays for them.

The General Secretary of the association in the state, Dr Fayemi Fakayode, who spoke on behalf of others, said the government should look into their plight and address their agitations, adding that whenever election came, politicians promised them heaven and earth but neglect the group immediately after getting to the office.

His words: “We are gathered here today to make our plight known to everybody in Oyo State. This peaceful demonstration is necessitated by the attitude of the Oyo State Government under the leadership of Engineer Seyi Makinde to the practitioners of Yoruba Traditional Religion in this state.”

“The present administration under Engineer Seyi Makinde has refused to give the practitioners of Yoruba Traditional Religion in Oyo State audience despite seeking the attention of the former by the latter through letters, like his predecessors, the former has exempted the letter in the cabinet and has denied the latter any kind of recognition, hence, our questioning justice and equity as the bedrock of democracy in the case of Oyo State.”

“As if the discrimination we are suffering is not enough, the state government has also been depriving us our constitutional right of having public holidays.”

“We hereby implore the Muslim community in Oyo State, Christian Association of Nigeria (CAN) and other stakeholders in this state, in the spirit of religious equity, to join us in our appeal to Oyo State Government to stop her game of discrimination, neglect, relegation and frustration against practitioners of Yoruba Traditional Religions in Oyo State.”

“The public holidays we are agitating for are five ranging from May 15th for Ela festival, first Saturday of June and Friday that precedes it for a pilgrimage to our land of Otu-Ife and 20th August which Oyo State House of Assembly has already moved the motion for since February 2017 now awaiting executive consent.”