Revealed! You Won't Believe How Much Money Nigeria Has Borrowed Under Buhari


As of the end of June 2015, one month after the present regime came into power, the country’s debt profile stood at N12.12tn. 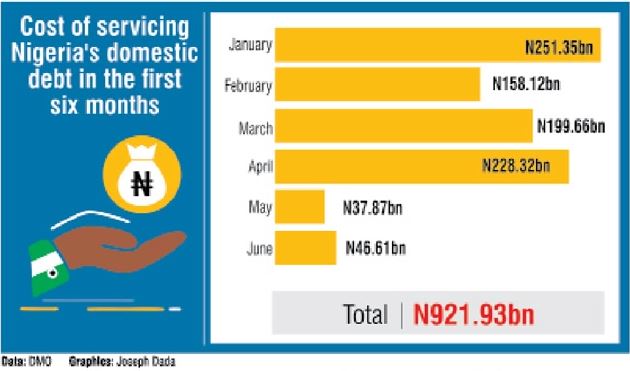 Nigeria’s debt public debt hit a total of N31.01tn at the end of June, the Debt Management Office announced on Wednesday.

This means that in the last five years under the President, Major General Muhammadu Buhari (retd.), the country’s debt rose by N18.89tn.

As of the end of June 2015, one month after the present regime came into power, the country’s debt profile stood at N12.12tn.

This means that within a period of five years, the nation’s debt profile rose by N18.89tn.

It also means that the country’s debt profile has risen by 155.86 per cent within the five-year period.

However, most of the debts were contracted by the Federal Government.

The Central Bank of Nigeria had on Tuesday released some data showing that the Federal Government’s component of the country’s debt stood at N24.52tn as of March 31.

A statement issued by the DMO on Wednesday indicated that the debt increased by N2.38tn within a space of three months.

For the country’s public debt stock as of June 30, 2020, the DMO said, “The data show that in naira terms, the total public debt stock which comprises the debt stock of the Federal Government, the 36 state governments and the FCT stood at N31.009tn or $85.897bn.

The debt office explained that the increase in the debt stock by N2.381tn or $6.59bn was accounted for by the $3.36bn budget support loan from the International Monetary Fund and new domestic borrowing to finance the revised 2020 Appropriation Act.

It said this includes the issuance of the N162.56bn Sukuk and promissory notes issued to settle claims of exporters.

The debt office said, “The DMO expects the public debt stock to grow as the balance of the new domestic borrowing is raised and expected disbursements are made by the World Bank, African Development Bank and the Islamic Development Bank which were arranged to finance the 2020 Budget.

“Recall that the 2020 Appropriation Act had to be revised in the face of the adverse and severe impact of COVID-19 on government’s revenues and increased expenditure needs on health and economic stimulus, among others.”

It stated that additional promissory notes were expected to be issued in the course of the year.

This and new borrowings by state governments were also expected to increase the public debt stock, the DMO explained.

A breakdown of the country’s total debt showed that the external component amounted to N11.36tn or 36.65 per cent of the total debt.

This leaves N19.65tn or 63.35 per cent of the country’s debt portfolio as the domestic component.

The external debt commitment of the Federal Government alone stood at N9.82tn or 31.68 per cent of the total debt profile.

The domestic debt of the Federal Government only stood at N15.46tn or 49.84 per cent of the national total debt.

The states and the FCT, on the other hand, owe domestic debt of N4.19tn. This is equivalent of the 13.51 per cent of the nation’s total debt commitment.

On the whole, the Federal Government owe N25.28tn while the subnational governments owe N5.73tn.

In proportional terms, the Federal Government holds 81.52 per cent of the nation’s total public debt while the subnational governments hold 18.48 per cent of the country’s total debt.

In the first six months of the year, the country spent N921.93bn on domestic debt servicing.

The government had earlier indicated that a total of N1.57tn was spent on servicing both external and domestic debts in the first six months of the year.

Experts have recently been raising alarm on the high cost of debt servicing, especially when compared to expenses on capital projects and dwindling revenues.

Recently, the Minister of State for Budget and National Planning, Mr Clem Agba, highlighted the scenario when he said the nation spent a total of N1.57tn on debt servicing in the first six months.

He added that within the same timeframe, the Federal Government’s retained revenue was N1.81tn, or 68 per cent of prorated target.

The Director-General, Lagos Chamber of Commerce and Industry, Dr. Muda Yusuf, said the debt situation was not surprising having regard to the devastating impact of oil price plunge on revenue and foreign exchange earnings.

He said, “Ironically, not much changes have taken place in the area of cost reduction.

“Expenditure has been rather sticky. Reforms that could ease the expenditure burden have been slow in coming.

“What do you expect in a scenario of dwindling revenue and escalating costs?”

He said the outcome was a further complication of the debt situation.

Issues around the high governance cost needed to be addressed, he added.

On the other hand, the Peoples Democratic Party said the President, Major General Muhammadu Buhari (retd.), and the regime he heads had placed Nigeria on auction in the international market.

National Publicity Secretary of the PDP, Kola Ologbondiyan, said this in response to inquiries over Nigeria’s rising debt profile.

He said “This administration has placed our nation in the international auction market.

“Any administration that toys with the sovereignty of our nation because of foreign loans will push our nation into reckless debt.

“This is what we have been going through under this administration that has nothing to show in the area of infrastructural development or economic wellbeing of our people in spite of these huge foreign loans.”

Former President, Association of National Accountants of Nigeria, Dr Sam Nzekwe, said it was worrisome that such huge amount had been taken as loans.

“How will you be able to pay with dwindling revenue and rising cost of governance,” he asked.

An economist and Chairman of the Foundation for Economic Research and Training, Prof. Akpan Ekpo, said the government should focus more on domestic resource mobilisation.

Ekpo, who is a former director-general, West African Institute for Financial and Economic Management, said, “The borrowing is getting too much. If you really need to borrow, you must justify it, and there should be transparency about what you are borrowing for.”

On alternatives to borrowing, he said the government could expand the tax base, not to increase the rate, so that more people can enter the tax net.

He said the government should do more public, private partnerships with respect to projects and encourage ministries, departments and agencies to partner with development partners for grants.

Ekpo also stressed the need for the government to reduce the cost of governance, which he described as ‘too high’.