The government of Seyi Makinde has revealed exact date schools are to resume next week. 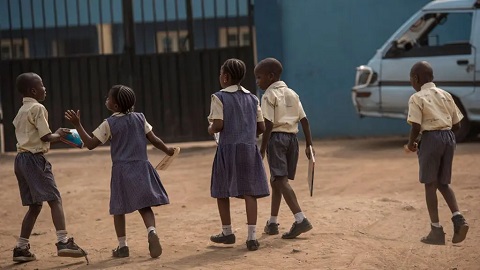 Students
The Oyo State government has stated that schools in the state will begin the 2020/2021 academic session on September 21, 2020.
The academic session is for primary and secondary schools in the state, the government revealed on Monday.
This was contained in a press statement by the Commissioner for Education, Science and Technology, Olasunkanmi Olaleye.
The statement was titled, ‘Oyo govt releases calendar for school resumption’.
Olaleye stated that the new calendar was approved on July 21 at a meeting of the State Executive Council.
He said, “The first term of the new academic calendar will run between September 21 and December 18, 2020.

“The second term of the academic session is expected to run from January 11 to April 9, 2021, while the third term will run between May 3 and July 30, 2021.
“The Ministry of Education, Science and Technology enjoins all stakeholders and members of the public to take note of the details of the academic calendar.”
Top Stories