Godwin Obaseki and his deputy have received their certificates of return from INEC. 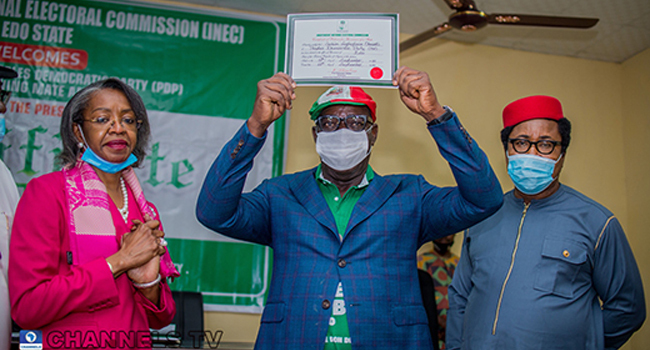 Obaseki receives his certificate of return from INEC
Following his election victory over the weekend, the Independent National Electoral Commission (INEC) has issued certificates of return to Edo State Governor, Godwin Obaseki, and his deputy, Phillip Shaibu.
The National Commissioner, INEC in charge of Edo, Rivers, and Bayelsa, Mrs May Agbmuche-Mbu made the presentation on Tuesday at the INEC office in Aduwawa, Benin City, the Edo State capital.
She commended stakeholders particularly the security agencies for their role in the smooth conduct of the governorship poll.
“I hereby certify that Godwin Nogheghase Obaseki of Peoples Democratic Party (PDP) has been elected to the office of governor of Edo State of the Federal Republic of Nigeria at the election held on the 19th of September 2020,” Agbmuche-Mbu said while presenting the certificate to Obaseki.
Governor Obaseki was returned elected by INEC after polling the highest number of votes in the keenly-contested election conducted on Saturday, September 19.
INEC Returning Officer for the poll, Professor Akpofure Rem-Rukeh, declared the governor as the winner on Sunday at the office of the electoral umpire in Benin City, which doubled as the final collation centre.
The governor secured 307,955 of the total votes, 84,336 more votes than his closest rival Ize-Iyamu, who got 223, 619 votes.
Watch video below:
Top Stories