The Edo State Governorship Election Petition Tribunal has been urged to nullify the governorship election result. 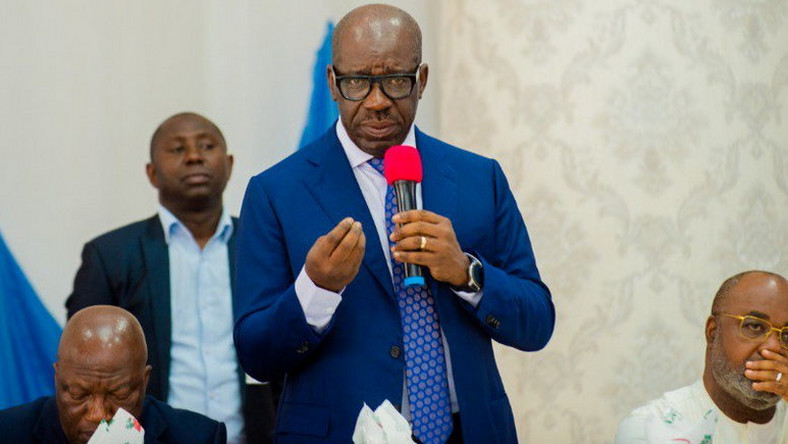 Godwin Obaseki
The Edo State Governorship Election Petition Tribunal sitting in Benin City, the State capital has been urged  to sack Governor Godwin Obaseki and declare the results of the just concluded governorship election null and void.
In a suit marked EPT/ED/GOV/01/2020, the Independent National Electoral Commission (INEC), the Peoples Democratic Party (PDP), Godwin Nogheghase Obaseki, All Progressives Congress (APC) and Andrew Osagie Ize-Iyamu are listed as 1st, 2nd, 3rd, 4th and 5th Respondents, respectively.
ADP in the petition, demanded the tribunal to declare that by virtue of his non-qualification, the votes credited to the PDP candidate should be null and void and of no value and that the election should be nullified.
The party and its candidate are basing their petition on several grounds, such as allegation that the PDP candidate presented forged documents to contest the elections.
ADP is challenged the eligibility of Obaseki, who won the election with over 80, 000 votes to contest the poll in the first instance.
They claimed that in an affidavit deposed to and presented to INEC in his Form CF001 in 2016, the incumbent Governor submitted a certificate purported to have been signed by the Vice Chancellor and the Registrar of the University and that in the Form EC9 submitted to the electoral umpire in 2020, the Governor attached an undated certificate with only one signatory purporting to be the signature of the Vice Chancellor of the University of Ibadan.
As part of the irregularities in the said UI certificate, the petitioners also alleged that the signature of the Vice Chancellor who signed the Degree Certificate being presented by Governor Godwin Obaseki, died in 2015 after retirement for a long time and couldn’t have signed a re-issued certificate in 2020.
“The petitioners will rely on oral and documentary evidence to show that Professor Tekena Tamuno who was Vice Chancellor of the University of Ibadan from December 1975 to November 1979 had not only died in 2015, but could not also have signed a document purporting to be a document of the University of Ibadan after his retirement and death”, they averred.
In their prayers, the petitioners prayed for “declaration that the 3rd Respondent (Obaseki) presented a forged and /or a false certificate to INEC in violation of section 182(1) [I] of the constitution of the Federal Republic of Nigeria, 1999 (as amended)”.
ADP and its candidate asked the Tribunal to declared that Obaseki was at the time the election not qualified to contest the election for having submitted an slleged false/forged document or certificate to the 3rd respondent, (INEC) along with his Form EC9″.
They further asked the court to disqualified the 3rd respondent as contestant in the governorship election.
Top Stories