Dr. Ngozi Okonjo-Iweala has expressed delight after being confirmed in the final race for WTO DG. 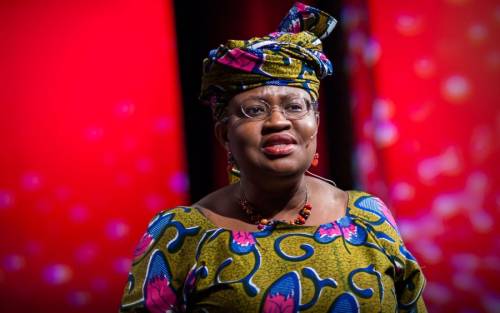 Nigeria’s Ngozi Okonjo-Iweala has reacted after she alongside South Korea’s Yoo Myung-hee emerged as finalists.

The two will now advance to the final round in the race to lead the Geneva-based trade body.

Happy to be in the final round of the @wto DG campaign. Thanks, WTO members for your continued support of my candidacy. I could not have made it without the prayers and support of all Nigerians and friends around the world. Thank you @MBuhari and all my friends. Aluta continua!
By advancing two women to the final round of the selection process, the WTO will likely have the first female Director-General in its 25-year history.
Okonjo-Iweala served two stints as Nigeria’s Finance Minister and one term as Foreign Affairs Minister.
She has experience working at international governance bodies as a former Managing Director of the World Bank and as a Chairman at the Global Alliance for Vaccines and Immunisation.
Yoo is South Korea’s Trade Minister.
During her 25-year career in government, she has helped expand her country’s trade network through bilateral accords with the United States, China and the United Kingdom.
The third and final phase of the consultation process would begin later this month and run until November 6, after which the WTO would name a consensus winner of the race.
President Donald Trump had blasted the WTO as the worst trade deal in US history and had pledged to overhaul it to better suit the country’s interests.
The vacancy for the top WTO job arose when Brazil’s Roberto Azevedo decided to step down at the end of August, a year before his term was due to end.

Happy to be in the final round of the @wto DG campaign. Thanks, WTO members for your continued support of my candidacy. I could not have made it without the prayers and support of all Nigerians and friends around the world. Thank you @MBuhari and all my friends. Aluta continua!