A governor has taken drastic action against police roadblocks in the state by placing a ban on it. 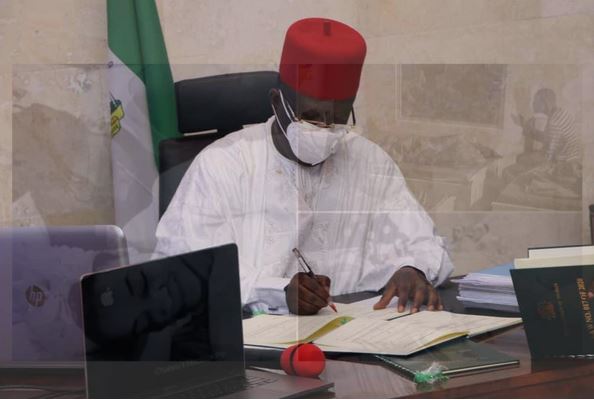 Governor David Umahi
Police officers in Ebonyi have been banned from setting roadblocks in all parts of the state.
The order was given by governor of Ebonyi State, Chief David Umahi in response to the protest against police brutality..
Umahi made this known while addressing over two thousand Ebonyi youths who staged a protest at the government house gate, Abakaliki, the capital of Ebonyi State.
He, however, ordered for the immediate opening of all tertiary institutions in the state to enable students go back to school.
The governor while addressing the protesters threatened to sack any lecturer who would fail to resume work.
He applauded the protesters for their courage, adding that their protests have achieved much for the country.
He said: “I do not deceive people in Ebonyi state. All tertiary institutions in Ebonyi State will resume school coming Wednesday and you will go back to school. Any lecturers who refuses to resume, I will sack him or her.
“One of the things I am going to take on with the commissioner of police and Army commander is to dismantle all roadblocks in Ebonyi State. We will no longer tolerate the roadblocks in our roads.
“The police can stay on one corner if they see any suspected car. They come out and search and then go away. Any police officer that asks you for money, I want you to resist that, call me on phone any time they ask you for money. Enough is enough,” he stated.
Earlier in a remark, one of the protesters, Mr. Stephen Ogama who spoke to the governor on their behalf requested that there should be immediate end to police brutality, that the activities of local government tax force should be checkmated, that the governor should stop the brutality at Ekeaba police station, etc.
Top Stories