There was a bitter exchange between protesting youths and the police in Jos on Tuesday. 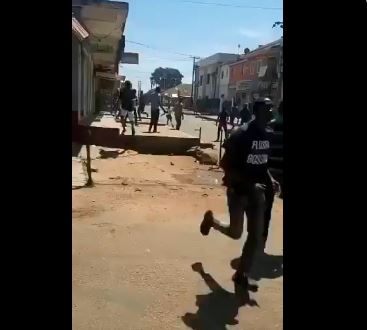 Youths and police clash in Jos
Police and youths protesting against SARS brutality have clashed in Jos on Tuesday.
According to eyewitness report, the protesters blocked roads forcing the police to release gunshots in order to scare them.
However, that did not deter the youths who chased the police officer with stone.
"As youth intensified their protest today in the city of jos, major roads in the state were blocked. Lo and behold there was gun shots by police, as a result of this, youth starts chasing the police operatives with stones while shooting persists.
The youths also deny access to the ongoing trade fare venuew (polo field ) in the state as they protest with speakers at the polo roundabout." the eyewitness said.
Watch videos below: