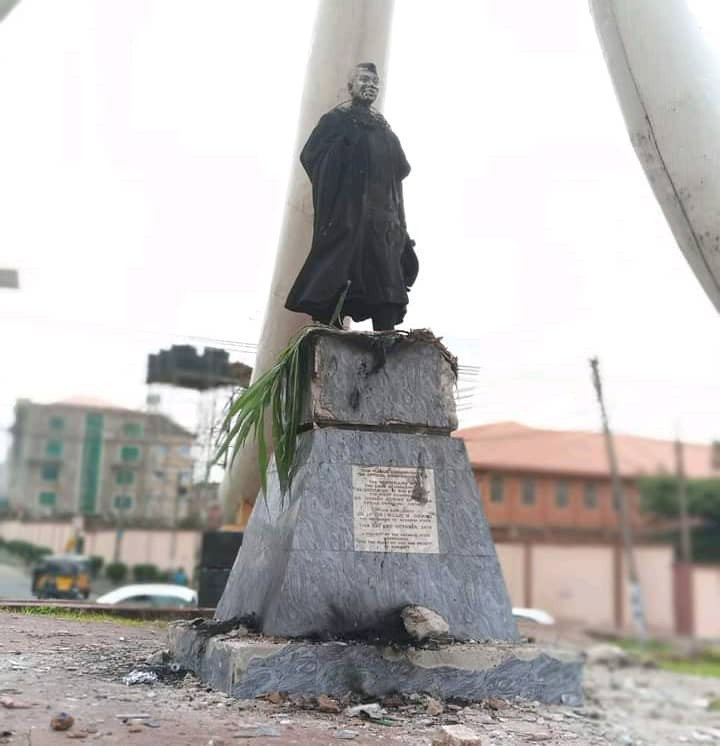 The statue was attacked

The PUNCH reports that the statue of the late Azikiwe, a pioneer President of Nigeria, was burnt by hoodlums infiltrating #EndSARS protesters in Onitsha, Anambra State.

While vandalising the effigy, the protesters were heard shouting, “You put us in this mess by championing one Nigeria,” “You are the cause of our trouble,” amongst other uncomplimentary remarks.

Narrating the incident, a kinsman of Azikiwe, Victor Ononye, described the incident as heresy and sacrilegious.

He said, “The Right Hon Dr Nnamdi Benjamin Azikiwe, the first President of Federal Republic of Nigeria, must be expressing regrets wherever his spirit is, for attracting independence to Nigeria.

“What happened at the DMGS Roundabout, Onitsha, which I saw with my own eyes evoked tears.

“They decapitated his hand and went away with his title staff. That was the height of ingratitude by the bastards who are ignorant of history.

“They descended on the various items used for decoration of the site and tore them to pieces. They were few in number. Why the police, who were a stone’s throw away to the roundabout, could not intervene was a mystery.

“I saw two vigilante men brandishing rifles and riding on a motorcycle. They stopped and the boys hailed them and they drove off.”