According to the chief coroner, it is only after a definitive scientific identification that the bodies of the deceased shall be released for burial. 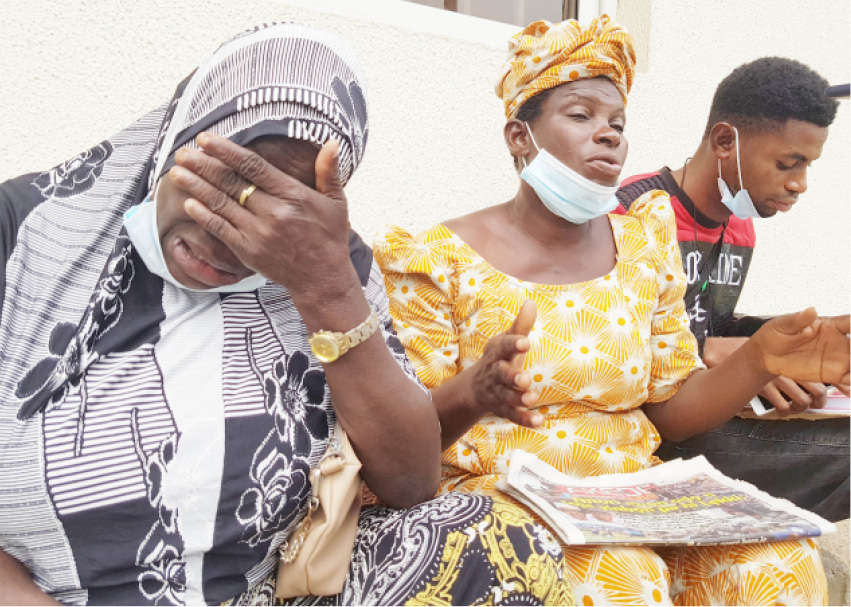 According to Daily Trust, the family members of Nigerians who went missing during the #EndSARS protests are searching for their loved ones.

The family members visited the facilities in response to the announcement made by the Lagos State Chief Coroner, Hon. Justice M. A Dada, on Wednesday, calling for the identification of missing persons between October 19 and 27, 2020 – a period that witnessed protests against police brutality and disbandment of the Special Anti-Robbery Squad.

In the public announcement, Dada gave next-of-kin of the missing persons two weeks to provide means of identification of themselves and their missing loved ones so as to assist the identification exercise.

According to the chief coroner, it is only after a definitive scientific identification that the bodies of the deceased shall be released for burial.

It was mixed feelings for the family members, who were kept at the Lecture Theatre/Demo Room of the department of pathology and forensic medicine, as some of them saw their missing loved ones while others were not so lucky.

Seventy three-year-old Adijatu Ogunfowora shed tears uncontrollably while narrating how her only son, 38-year-old Sunday Adeyemi Ogunfowora, was killed during the protest at Ifako Gbagada on October 15. The elderly woman, who is a widow and had lost a daughter as well, said she is from Ijebu in Ogun State but gave birth to her seven children in Lagos. She was in the company of her daughter, Mosunmola, and son in-law, Nicole Olatokunbo.

“He was killed by a stray bullet during the protest. He lives on the street where the protest was held. After, he was shot, we ran to Ifako Police Station but they didn’t release his body to us. At first, they denied having his body in their custody, until much later when they said they have taken all those killed to IDH. We found his body at IDH on October 19. The attendant told us that he was brought naked around 1am on the day he was shot. Imagine, someone that was shot around 10am,” Olatokunbo said while fighting back tears.

The relatives of the deceased said they have been visiting the hospital since October 19, but the management refused to release the body, claiming that it was awaiting approval from the state government.

“Luckily for us, we got a call on Monday that the government has asked them to release corpses related to the #EndSARS protest but we would need to come to LASUTH to process it. We have been asked to provide his photo, our national ID cards and his. We have been here for four hours now but we are yet to get his body,” Olatokunbo added.

The mother, who described her deceased son as easy-going and said she has accepted her fate and not interested in any court case or judicial panel, pleaded with the government to release the body so she can bury her son.

“I have accepted my fate. I don’t care about what the government is going to do to the perpetrators. They killed him when he should be feeding me. The government should release his corpse, without burying him, I can’t rest.  I have accepted my fate but I should not be punished like this. Imagine, coming from Gbadaga and Bariga every week because I want to claim the body of my son at this my age. I can’t sleep, I am always weeping,” she said as other relatives consoled her.

The elder sister, Mosunmola, said her brother’s dreams and aspirations were cut short in his prime as the family was planning for the first year remembrance of their father who died last year.

“He is a good, easy going person. He does not fight. People always mock him that he is too fearful because he will always run away from trouble or anything that can cause intervention of police. It is not up to a year we lost our father. We were planning the first year remembrance before his life was cut short. Our mother is a known APC stalwart in Gbagada. Four of us are also in the party but look at what has befallen us,” she wailed.

A distraught Ngozi Ojukwu was not lucky as she is still looking for her nephew, Chinedu Agbasielo, who went missing more than a month ago.

“He was not at the protest ground. His colleagues confirmed that he was at the shop. They said they heard gunshots and everybody ran helter-skelter but since then we have been looking for him. We don’t know if he was shot, arrested or dead. We have visited many police stations to gather information and morgues but to no avail. We couldn’t find him here so they have asked me to go to mortuaries at Lagos Island and Ikorodu,” she said.

We don’t have bodies at LASUTH

The management of LASUTH has clarified that it does not have any of the bodies in its facility, stressing that only the administrative aspect of the identification exercise would be carried out at the Pathology Department of the hospital.

The Chief Medical Director (CMD) of LASUTH, Prof. Adetokunbo Fabanwo, said the hospital does not have any direct dealing with the case.

“LASUTH as an organisation does not have anything to do with this incident. It only happens that the private mortuary that is serving us is located in LASUTH; it is a private venture. And the chief medical examiner for the state, who is working in conjunction with the ministry of Justice about this case, is one of our pathologists here. So, as the Chief Medical Director, I don’t have any direct dealing over the case, so I don’t know how many bodies but I know they are not here,” he said.

It was gathered that the Ministry of Justice has directed the Chief Medical Examiner in the state, Prof. John Obafunwa to carry out autopsy on the bodies “purportedly belonging to #EndSARS protesters.”

When contacted, Prof. Obafunwa declined to comment on the matter, noting that he is not the appropriate authority to contact but pledged that no falsified information will come from him.

Meanwhile, it was gathered that bodies were not released yesterday as the family members of missing persons were directed to return to LASUTH on Monday.

Olatokunbo, who confirmed this to Daily Trust Saturday, lamented that after waiting for over five hours, the family members were asked to return for documentation on Monday while the corpse would be released on Tuesday.

Another young man who had also identified the corpse of his relative confirmed the development to our reporter.