A petitioner caused a serious stir after identifying a police lawyer who assaulted him sitting inside Lagos Judicial panel building. 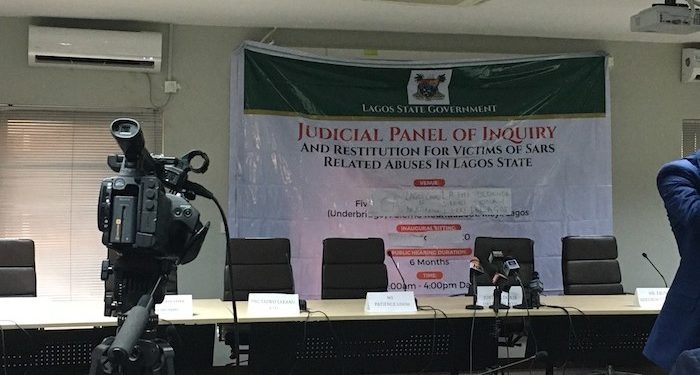 Police man confronted for assaulting petitioner
A drama played out at the Lagos State Judicial Panel of Enquiry and Restitution for Victims of SARS related abuses and other matters after a petitioner accused a police lawyer of being the person who assaulted him.
The petitioner claimed that the police lawyer slapped him four times.
The police lawyer was on the defence team, defending police officers accused of assaulting members of the public.
The petitioner, Okolieagu Abunike, had just been cross-examined by police counsel Emmanuel Eze when he sought the panel’s permission to speak.
Abunike, a father of five, had already answered questions about his allegations that in 2012, Federal Special Anti-Robbery Squad (FSARS) operatives detained and tortured him for 47 days at their Ikeja office, without trial.
But on getting permission to speak from panel chair Judge emeritus Doris Okuwobi, he pointed at the police lead counsel, Mr. Joseph Ebosereme, and accused him of assault.
Abunike said: “I am surprised today to see a counsel sitting before this tribunal in my proceedings, Mr. J. Ebosereme.
“Last year he slapped me four times at Panti (State Criminal Investigating and Intelligence Department, (SCIID) when I went to serve him a court process. He said I should slap him back if I had the balls.”
Responding, Ebosereme denied the allegation, claiming that it arose following his refusal to compromise his integrity in the N200m judgment debt recovery case involving a law firm linked with Ebosereme.
“He (Abunike) wants to dent my image…Myself? Slapping you? I don’t sell my integrity for a pot of porridge,” the police officer said.
Top Stories