Darlington explained to the panel how he was wrongly accused by his company, First Bank of Nigeria, arrested and tortured for days. 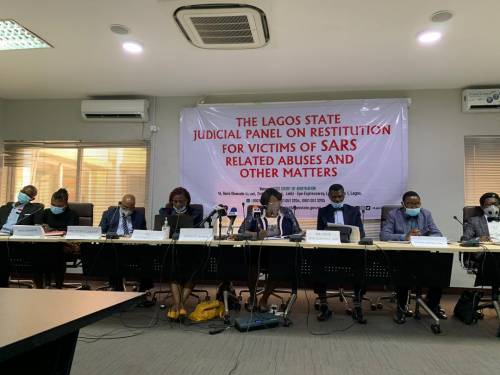 Omeli Humphery Darlington, a Nigerian man, has accused the police of acute torture.

The man submitted a petition to the Lagos State Judicial Panel of Inquiry against the Nigeria Police Force on how he was brutalised and assaulted in 2013.

Darlington explained to the panel how he was wrongly accused by his company, First Bank of Nigeria, arrested and tortured for days.

He stated that his ear drum had been damaged as a result of the torture by the police officers.

He said, "This allegation was a crime I know nothing about as all evidences clearly points to those involved. But First Bank Of Nigeria Plc had to instigate the Nigeria Police Force to subject me to (11days) illegal detention with torture, without any form of fair hearing till date.

"I was discharged on the third day 27/09/2013, but on my way home, some of the First Bank Head Office Security Operatives ( 1. a MOPOL, 2. a spy police, 3. Mr. Okon, 4. Mr. Abidemi) kidnapped me, blindfolded me, and beat me up with different objects within reach. The Mobile Police man with them kept hitting my head with the butt of his gun till blood started gushing out from both sides of my ears.

"They tried to kill me so that it would look like I got lost on my way home but God intervened by using other citizens to rescue me (witnesses).

"The people who rescued me insisted that I should be taken to a nearby police station which happened to be the Ikoyi Police Station on the Lagos Island.

"Everyone joined to Ikoyi station where the masses handed me over to the police with the hope that I was safe but when we got inside, these set of First Bank operatives instructed the police to torture me to admit to a crime I know nothing about.

"The Ikoyi police officers (INSP. Adeleye Bashiru and his boys) proceeded to torture me that night based on the report made by First Bank Security operatives that I was a fraudster and a criminal who defrauded the bank of N355m.

"The officers tortured me by using iron rods to beat me on my joints saying I should take them to where I kept the money.

"Iron was inserted into my private part until i could no longer bear the pains and fainted."

He stated that the torture continued in the cell for seven days before the police eventually charged him to court on false charges.

He said he was arraigned before Mrs A.T Omoyele of Tinubu Senior Magistrate Court (II), Lagos, on charges of stealing, conspiracy and forgery without presenting an evidence before the court.

"I could not perfect my bail and had to be remanded at the Ikoyi Prison all through the period till I finish disposing my properties just to meet my bail conditions.

"My ear drum was damaged along the line from beating by the police  (doctor's report attached) and I kept going to court till (24/02/2014) when the case against me was finally struck out for lack of diligent prosecution.

"It will interest you to know that I won a N500,000 judgment against the police in the rnforcement of my fundamental human rights suit I filled against the police and First Bank after my release. Unfortunately, the police in keeping with their position to deal with me has blatantly refused to pay the judgement debt till date," he added.

Darlington prayed the judicial panel to order the police to pay the sum awarded to him and other compensation to enable him have proper medical treatment as his health condition had degenerated.