Many officers of the Nigerian army have tested positive for coronavirus following the death of a senior officer. 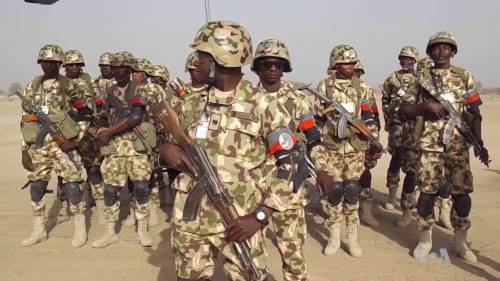 Army (File photo)
A serious panic has enveloped the Nigerian Army headquarters after as many as 26 officers tested positive for coronavrius.
This comes after the death of a senior officer, General John Olubunmi Irefin who died of coronavirus complications.
According to Sahara Reporters, the Nigerian Army has confirmed that a total of 417 of its officers and personnel have been tested as of Sunday of the COVID-19 virus and 26 have been confirmed positive.
The army noted that all participants at the Chief of the Army Staff Quarterly Conference where the virus first broke out, had remained in self-isolation irrespective of their results.
The Acting Director, Army Public Relations, Brig-Gen Sagir Musa, who stated these in a statement, adds that the Nigeria Centre for Disease Control-recommended COVID-19 treatment drugs "were immediately issued to its personnel that tested positive."
He said, "The Chief of Army Staff's Annual Conference started on December 7, 2020. Among the attendees was the late Maj Gen J.O. Irefin, the late General Officer Commanding 6 Division, based in Port Harcourt, Rivers State. The same day, at about 9 pm, having complained of fever, headache and mild cough, he was taken to Defence Medical Centre, Abuja.
"Sadly, he passed away on Thursday, December 10. The cause of his death was reported as respiratory failure secondary to the complications of COVID 19 infection.
"On the confirmation that Gen Irefin's COVID-19 test was positive, the Chief of Army Staff directed the immediate suspension of the conference and all participants were directed to move into self-isolation in line with FGN protocols on COVID 19 pandemic.
"Equally, comprehensive testing of all participants commenced immediately. Consequently, as of Sunday, December 13, 2020, a total of 417 personnel have so far been tested with 26 confirmed positive cases. Currently, all participants are in self-isolation irrespective of their results while NCDC-recommended COVID-19 treatment drugs were immediately issued to those that tested positive.
"Accordingly, all officers and soldiers working at the Army Headquarters are being tested and the entire Army Headquarters complex was thoroughly fumigated on Saturday."
Top Stories