She also hinted that fighting for the players’ rights was part of the reasons she was removed as the skipper of the team. 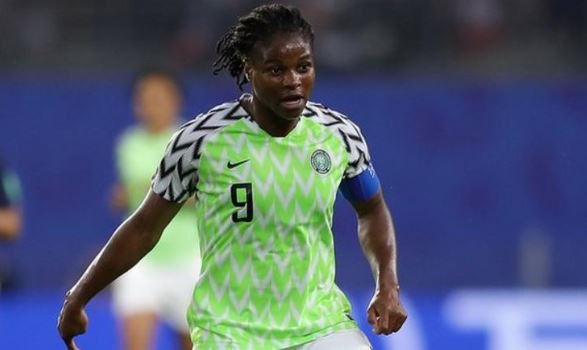 Desire Oparanozie, an ex-Super Falcons captain, has made a revelation about the Nigeria Football Federation (NFF).

She revealed that the NFF failed to pay the bonuses owed the female national team players for three years, The PUNCH reports.

She also hinted that fighting for the players’ rights was part of the reasons she was removed as the skipper of the team.

She said this on Friday during an interview session on PUNCH Online programme, Kick $ Follow.

The Dijon FCO forward said she took the right step by ensuring that about $4,500 owed the Falcons by NFF was paid.

The PUNCH reports that players and officials of the Nigerian women’s team staged a sit-in protest in Grenoble, France in June 2019 over a backlog of unpaid bonuses for World Cup appearance fees.

Before protesting in France after their Women’s World Cup exit, the team had protested over bonuses in 2004 in South Africa and 2016 in Abuja.

During the 2016 protest, members of the female team stormed the National Assembly after winning the 10th edition of the African Women championship held in Cameroon.

Oparanozie lamented that after many years of complaining, NFF was not willing to pay all the players entitled to the bonus.

“Later, they (NFF) said they no longer pay in foreign currency, that we would be paid N500,000 instead. But I argued that the new law wasn’t in effect in 2016 and the officials agreed.

“They promised to pay us for three years but they didn’t pay us. Later, they agreed to clear the bonuses owed since 2016. So, what they did was to pay only players in the 2016 camp that are still playing in 2019. They left out others that didn’t make the 2019 team.

“I told them to pay those that didn’t make the team for 2019 while those of us still playing should be owed. We went back and forth on that for a couple of days; and in the end, they were able to pay the players that were not in the 2019 team.”

She, however, reiterated her call for equal pay between men and women footballers.

“This is doable but for some reasons, some individuals won’t want it to happen. It doesn’t have to be equal. What women earn is next to nothing compared to men. Even if it won’t be up to 100 per cent, let us close the huge gap. Being in sport as a female is not easy.”