According to Akintola Olusola, his protest was met with anger as the herders repeatedly macheted and beat him up. 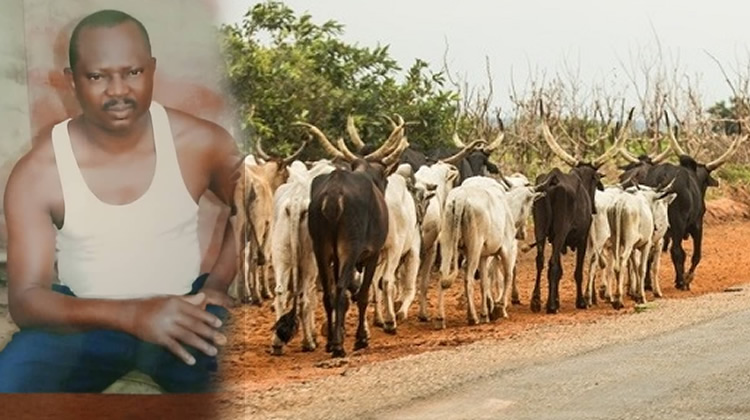 One Mr Akintola Olusola, a farmer in Igangan, Ibarapa North-West Local Council Development Area of Oyo State, has told teh story of how Fulani herdsmen invaded his cassava farm and destroyed his produce.

According to Akintola Olusola, his protest was met with anger as the herders repeatedly macheted and beat him up.

Speaking in video clips obtained by The PUNCH, Akintola said the incident occurred on October 15, 2018 while he and his workers harvested cassava on his 30-hectare farm.

“If not for the grace of God and the backing of our ancestors, I would have lost my life,” the farmer in his mid 40s said.

“I was on my farm on October 15, 2018 harvesting cassava with my workers. My farm is about 30 hectares. We had loaded five trucks but still had some cassava on ground to move to town. So, we decided that one of the trucks would come back to move the remaining cassava. I stayed behind waiting for the truck to return.

“Around 4pm, the herders came with scores of cattle. I told them not to go into the part of the farm with the fresh harvest but they insisted that their cattle would feed on the just-harvested cassava.

“When they saw that their machetes and swords didn’t penetrate my body, they hit me with their sticks. I ran to the main road and mounted a bike home,” he said.

Akintola said he reported the case at Igangan Police Post but the policemen on duty asked him to first go to the hospital for treatment.

The farmer said he was shocked that there were no arrests two days later; adding that he then informed the secretary of the farmers association in Igangan who filed a petition at the area command office accusing the herders of attempted murder.

“The area commander later asked the Seriki Fulani to produce the herders but he didn’t,” he added.

Akintola further said, “I and other farmers approached the Inspector General of Police Squad in Ibadan to get justice. They came to Igangan but they were unable to arrest them (herders) because the Fulani people said the herders had gone to Republic of Benin. That was how the case died.

“I want to implore all Yoruba people to come to our aid. The Federal and State governments say we should return to our farmlands but how safe are our lives on the farms? We have lands but the Fulani herders are our problem.”

At the expiration of the ultimatum, Igangan residents, emboldened by Igboho’s presence had ejected the Seriki Fulani, Abdulkadri Saliu, and his herders out of the rustic town.

The residents of the town also vowed never to allow Saliu and his men return to the community.