The oil magnate took to Facebook to deny claims that he purchased the N32M SUV for the Nollywood actress. 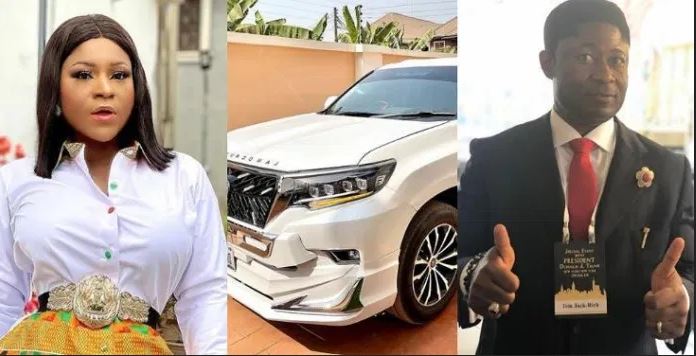 Following the recent rumours that the Prado SUV acquired by Nollywood actress, Destiny Etiko was given to her by a Nigerian oil businessman, Tein Jack-Rich, he has now has denied claims that he bought the vehicle for her.

Last week, Destiny posted photos of the wonder wheel on her Instagram page. Shortly after the post, some persons alleged that she got the car gift from the oil businessman who is married with children.

Destiny in a video posted on her IG page last night, denied this allegation, stating she has never met the man in question and cursed those who are peddling the rumor.

The oil businessman has also reacted to the allegation. A post shared on his Facebook page reads;

''Just saw these..can this be real news...What a world. Campaign of calumny... great news and achievements for societal advancement are not given widespread publicity to encourage others to help those in need.

Never seen these faces before, never heard of these names either not to talk of closeness to such magnitude. But such is life. Never got calls and great spreads of our vision for a prosperous communities and nation but as preposterous as these, circulation reaching 5m...waaaoooh...what a political enigma....these real or one of those jokes thrown by political strategist or Wisemen to keep one defending what is unreal to shrink ability to create real substances to address needs.'' 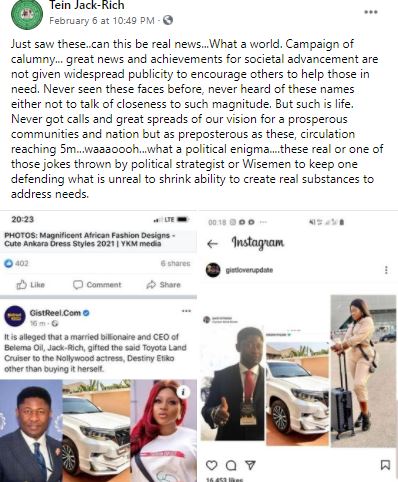