Nigeria's President Muhammadu Buhari has been dragged to court by the Nigerian Bar Association. 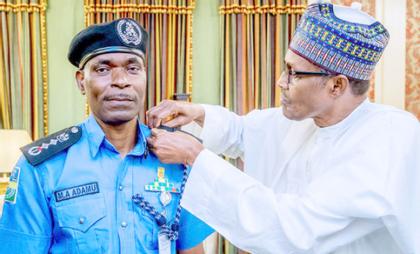 IGP Mohammed and President Muhammadu Buhari
President Muhammadu Buhari's decision to extend the tenure of Mohammed Adamu’s as inspector-general of police has been challenged in court by the Nigerian Bar Association.
Buhari, Adamu and the Police Service Commission are named as respondents in the suit FHC/L/CS/214/2021 filed by NBA’s public interest litigation committee before the Federal High Court in Lagos.
NBA wants the court to determine the constitutionality of Buhari’s extension of Adamu’s tenure as IGP for three months after Adamu on February 1 attained the mandatory 35 years in service.
It said it is guided by an urgent need and sacred duty to reassert the supremacy of the rule of law in the face of growing impunity and the seeming reluctance of Law Officers in Government to give proper counsel.
NBA’s position is that Adamu ceased to be a member of the Nigeria Police Force when he attained the mandatory 35 years of service.
It called extension of his tenure “unconstitutional”.
The end of Adamu’s tenure came when he clocked 35 years in service on Feb 1.
Workers retire upon clocking 35 years in service or reaching the age of 60, whichever comes first, according to service rules.
Speculation regarding his replacement was rife, and some had been tossed out before the presidency announced a three-month extension to Adamu’s tenure.
“In the grand scheme of things, the NBA is wary that the more government officials casually violate the law, the harder it would become to expect citizens to be compliant. Citizens take their cues from their leaders and public office holders who flout the laws of the country that they are meant to uphold will discover sooner or later that their examples will be followed by those that they purport to govern,” it said.
“The ubiquity of acts of impunity, especially by those in high public offices, portends an existential threat to the survival of this country and her hard-won democracy.”
Top Stories