Security Guard Who Confronted His Boss For His Salary Jailed


The security guard confronted his boss at his firm where he blocked, pointed fingers and shouted at him to pay him. 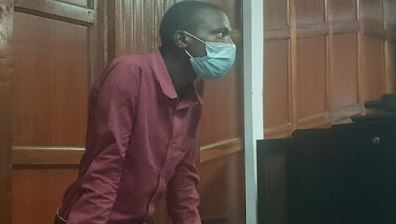 A security guard has been arraigned in Milimani Law Courts on Monday, February 22, for daring his employer to shoot him with his pistol while demanding his two-month salary arrears amounting to Sh18,000.

The prosecution told the court that Mugane confronted his boss, Peter Mwangi, a director at Guardnow Security Company at the firm’s headquarters, where he blocked, pointed fingers and shouted at him, yelling “shoot me with your pistol.”

The accused, who denied the charges, said he went to Yala Towers to demand his salary arrears but at the time the boss was not in his office so he had to wait at the reception.

At the office, Mugane said he met the accountant who informed him that his salary was not ready.

“When the boss arrived, he passed by him and went to his office. When he came from his office, he asked me how much my salary was and I insisted I won’t leave without it because my landlord had locked me out of my house,” said Mugane.

However, according to the suspect, instead of paying him his dues, Mwangi called the police on him leading to his arrest.

Just like him, Mugane’s landlord was also demanding his two-month rent of Sh7,000.