According to Asang, her mother, who practices the Catholic faith, expressed sadness when she broke the news to her but afterwards expressed her love for her. 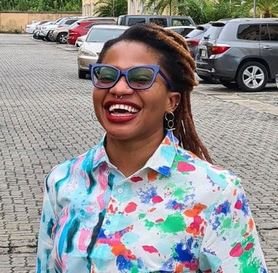 A Nigerian lady identified as Asang Edem has revealed her mother's reaction after she revealed her sexuality to her.

According to Asang, her mother, who practices the Catholic faith, expressed sadness when she broke the news to her but afterwards expressed her love for her.

''I (officially) came out to my (Catholic) mother. I watched her as her heart broke again, probably thinking, so the rumors are true. This thing that you are will send me to an early grave, she said. Come, see where you should bury me when I die, she pointed.

My heart broke too. But I recognised this for what it was. The universal language of African parents - Emotional blackmail. I'm not an unholy thing, I said. I am not a sin. In spite of how hurt I am that you said that, I won't accept it. No be me go kill you.

Immediately alarmed, she said - I would never call you a sin, you are my child. I love you. You will always be my baby but - No buts. You say you love me, then love me. She talk her own, I talk my own sef. Finally - so one day, you will bring home a wife? Yeah, most likely.

Hmmmm. She heaved. Hmmmm. I heaved too. Mine was of relief. I am officially out to my mother.'' 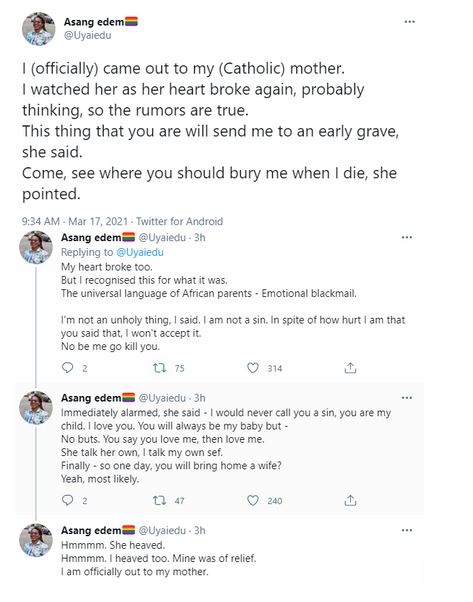