In Ibadan, the most senior masquerades are Oloolu, Alapansanpa, Atipako and so on. Out of these, the most dreaded is Oloolu, which they say, a woman must not see. 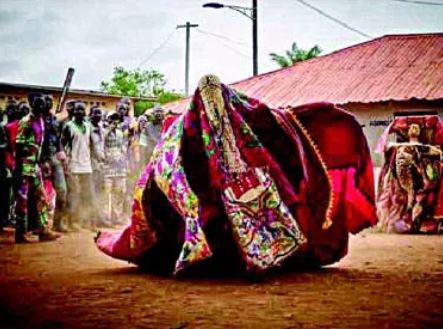 The story has been told of how youths attacked a masquerade in Oyo State.

In a saner clime where there is strict adherence to cultural values, a masquerade is a sacred ancestral being that must be accorded due respect.

Some people worship it as a god. In Africa, a masquerade performs social roles and entertainment and they are believed to be communicating with spirits by their adherents.

They are found in most parts of Africa. In Nigeria, masquerade festivals are observed annually in states like Edo, Oyo, Osun, Ekiti, Ogun, Lagos, Cross River, Ondo, Akwa Ibom and other parts of the country.

In all these states, they have a particular masquerade that is considered the most senior.

In Ibadan, the most senior masquerades are Oloolu, Alapansanpa, Atipako and so on. Out of these, the most dreaded is Oloolu, which they say, a woman must not see.

It is a popular belief among masquerade adherents in the sprawling city, that any woman who sees the Oloolu masquerade will remain barren. So, it was very surprising to hear that some youths attacked the dreaded masquerade. But, this is not the first time that the masquerade will suffer such attacks.

During the reign of the former Olubadan of Ibadan, Oba Samuel Odugade Odulana, the masquerade was attacked by some Muslim youths who had earlier warned the masquerade not to come to their neighbourhood.

The masquerade was seriously injured with bruises all over its body.

Like a recurring decimal, the masquerade, again, suffered another assault by a group of youths while performing its annual rituals in the metropolis.
Several others were reportedly injured.

Five killed during the fracas

Five people were reportedly killed during the fracas while others sustained injuries.

According to information gathered, the hoodlums, numbering 80, swooped on the masquerade and its followers at Oje area of Ibadan with dangerous weapons.

According to an eyewitness, the irate youths, who were armed with machetes, clubs and cutlasses, waylaid the masquerade when the rites were almost completed.

When Vanguard called the National President of Soludero Hunters Association, Oba Wahab Ajijola Anabi to find out if he knew about the incident, he answered in the affirmative.

Anabi said: “Yes, I was part of the entourage of Oloolu when the ritual was being performed by the masquerade. It is an annual sacrifice the masquerade performs around the city to ensure peace reigns in Oyo State.

“The masquerade started the rituals in the morning and as he was about concluding it in the evening at Oje, some youths, without any provocation, swooped on the masquerade and people that followed him.

“They were many. From the way I saw them, they were about 80. They killed no fewer than five people. Among the attackers was a popular hoodlum called Star boy. He is very deadly. The youths were brandishing cutlasses, guns and other dangerous weapons.

“Last Friday, four boys were injured when they were attacked by the hoodlums. They are being moved from one place to another for treatment.

“Governor Seyi Makinde should empower these local security agencies. Now, the hunters, Agbekoya, Vigilante and Landlord Association will ensure that all the hoodlums are arrested and handed over to the police for prosecution.”

Speaking on the incident, the Iyaloja of Oje market, Alhaja Oluwakemi Akala said the youths threatened to set her shop ablaze after chasing her sales girls away.

“The government should please help us in checking the excesses of these hoodlums”, she said.

Why we attacked Oloolu—aggrieved youths

One of the youths who pleaded anonymity alleged that the masquerade held them, hostage, for no reason.

“The masquerade claims no woman must see him and he was walking about during daytime when most people, including women, will go to their places of work.

“Are they saying we must not go out and fend for ourselves? If they want to do such a thing, let them do it between 12 am and 4 am when people are asleep. Why should they violate our rights on the flimsy excuse that a masquerade is performing rituals?

“They should know Ibadan is not a village. I wonder how they can perform such rituals within the city. They can go to the outskirts of the city where there are fewer people,” the youth said.

Though normalcy has since returned to the place after the intervention of security agents, the scars of the attacks are still evident.
While the melee lasted, some shops were looted.

The next day, some youths again mobilised to continue the crisis but they were dislodged by scores of security agents deployed to the area.

A commuter, Biola told Vanguard that when she got there the following day, an armoured personnel carrier was stationed there to check escalation of the crisis.

Oba Ajijola, who confirmed that normalcy has returned to the area, assured that all conventional and local security agencies would team up to arrest the hoodlums who usually cause trouble within the metropolis.

He further disclosed that the Commissioner of Police, Mrs. Ngozi Onadeko convened a meeting with local security agencies where she urged them to ensure that peace reigns in the state.

The Police Public Relations Officer, CSP Gbenga Fadeyi said he had not been briefed.

He promised to find out from their men in that area.

When called again for any update on the issue, his phone rang but he didn’t pick it.