An ex-Nigerian minister of aviation is using the police to fight former employees that made damning allegations against him. 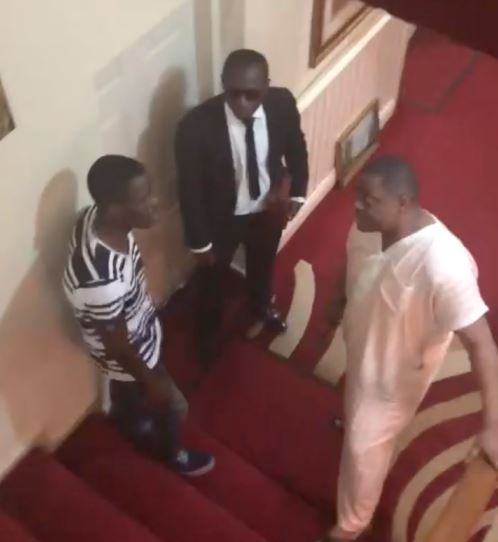 FFK and worker
A former nanny to Femi Fani-Kayode who accused the ex-aviation minister of sexual assault may have landed in trouble.
This comes after the FCT police command began a hunt for the woman identified as Anthonia Uchenna.
He had accused Fani-Kayode her former boss of physically and sexually assaulting her.
Others who are being hunted are: Emmanuel Anakan (former dog handler), Osakwe Azubuike (former carpenter), Oko Emmanuel (former cook), Daniel Gona (former driver), and Agbolo Edah (former cook), who accused the ex-minister of assault.
However, the police have arrested Jonathan Gaiya, a former driver.
The police also invited PUNCH reporter, Eniola Akinkuotu, who interviewed Fani-Kayode’s ex-workers.
When contacted on the telephone, the Head, Legal Department at the FCT SCID, James Idachaba, said it was only an investigation and those accused would be charged to court if the Force established a prima facie case against them.
When asked if it was the job of the police to investigate libel, Idachaba said, “I am a lawyer of over 20 years. I don’t investigate libel cases.
“The petition sent to the CP and forwarded to me is that of criminal defamation. That is what I am investigating including fabrication of false statement.
“We don’t do that (force people to recant statements) in our office. He (driver) was brought to my office and it was recorded. We are conducting investigation and if we see there is a prima facie case, we charge to court.”
About eight of Fani-Kayode’s former domestic staff had recently visited The PUNCH office in Abuja where they took turns to level allegations of assault and sexual harassment against the former minister. The former domestic workers  had also stated the allegations in sworn affidavits.
In a bid to get a response from Fani-Kayode, The PUNCH had forwarded all the affidavits to him on March 9, 2021 in order to ensure balance.
Rather than respond to the allegations, however, Fani-Kayode hurriedly wrote a petition to the State Criminal Investigation Department, FCT command, accusing his former workers of defamation and perjury.
Some of the former domestic aides, who have now gone into hiding for fear of retribution, said the ex-minister resorted to strong-arm tactics to compel them to withdraw their statements.
Acting on the petition, the police began tracking all the domestic servants and arrested Gaiya and made him to withdraw his allegations.
Gaiya was subsequently released and then asked to return regularly to the police to make statements.
The police also invited PUNCH reporter, Akinkuotu, who had conducted the interview.
In a letter titled, ‘Letter of Invitation. Re: Eniola Akinkuotu’, signed by the officer in charge of the legal section, CSP James Idachaba, The PUNCH was asked to produce Akinkuotu on March 22, 2021.
The letter, which was addressed to the Managing Director, PUNCH Nigeria Limited, dated March 17, 2021, with reference number AR:3000/FCT/X/D10/Vol.6/178, was delivered to The PUNCH office by one Iorshagher Terkaa
It read in part, “This office is investigating a case of conspiracy, perjury and defamation of character wherein your staff named above is needed as a witness with a view to arriving at a successful conclusion.
“In view of the above, you are requested to release the above named person to interview the undersigned on March 22, 2021 by 10.00hrs. As we await your prompt response, accept the esteemed regards of the commissioner of Police FCT.”
The PUNCH published the interviews of the domestic servants despite spirited attempts by Fani-Kayode to get the newspaper to drop the story.
One of the ex-workers, Oko, had told The PUNCH in the interview that the ex-minister once chased him around the house with a knife because he was not happy with his cooking.
Oko, who worked for the ex-minister for six months, had said, “Chief Fani-Kayode is a paranoid soul that gets angry for no reason. There was a time he held a knife and was walking around the table and said ‘I will kill you now’, ‘I will send you to hell now’. I would be running around the kitchen while his police orderlies would be watching,” he said.
Fani-Kayode, who had said he was not going to react to the allegations when contacted prior to the publication, however, sent a pre-litigation letter to The PUNCH on March 18, 2021, claiming that he was not given the opportunity to respond to the allegations.
The former minister, in a letter signed by his lawyer, Adeola Adedipe, said the entire episode was orchestrated by his ex-lover and mother of his four sons, Precious Chikwendu, who is engaged in a custody battle with him.
He asked The PUNCH to enter into negotiations for the possible payment of N6bn as damages for the defamation of his character.
The letter read in part, “Please note that our client’s intention to institute a civil suit against your organisation for defamation alongside Ms Precious Chikwendu and her sister, Prisca Chikwendu, who are believed by our client to be the masterminds of this scandalous assemblage.
“We are not unmindful of the roles played by Emmanuel Anakan (former dog handler), Anthonia Uchenna (former nanny), Osakwe Azubuike (former carpenter), Jonathan Gaiya (former driver), Oko Emmanuel (former chef), Daniel driver (former driver), and Agbolo Kosi Edah in actualising the maliciously scripted plan to defame our client. They will also be legally proceeded against.
“However, for whatever it is worth, you may wish to enter into negotiations with us for the sum of N6bn as a token amount for penitence, apologise to our client on the platform you made available to scandalise him and thereafter assist the police with investigation.”
Top Stories