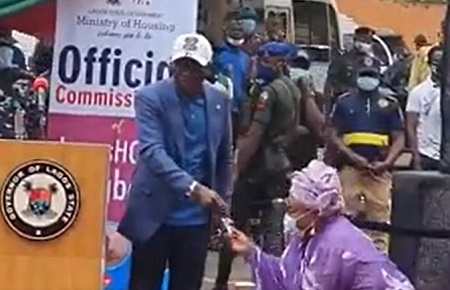 Nollywood actress, Awero receives a house from Governor Babajide Sanwo-Olu
Nollywood veteran, Lanre Hassan aka Iya Awero is the latest owner of a three-bedroom flat.
The actress received the house as a gift from Governor Babajide Sanwo-Olu.
Iya Awero’s house is located in the newly commissioned Prince Abiodun Ogunleye Housing Estate, Igbogbo, Lagos State.
The Chief Press Secretary to Lagos State Governor, Gboyega Akosile, announced Sanwo-Olu’s gift on Twitter on Wednesday.
Akosile also shared a video of the handing over with the caption:
“Governor @jidesanwoolu today commissioned and delivered and renamed the LagosHoms, Igbogbo as Prince Abiodun Ogunleye Housing Estate, Igbogbo.”
70-year-old Mama Awero began her career in the movie industry with the Ojo Ladipo Theatre Group.
Her acting career has spanned over four decades and she has featured in both the Yoruba and English speaking sectors of the film industry.
Before she became a celebrated movie star, her acting career was met with some resistance from her parents and guardians in the early days.
It took much convincing before they finally accepted her career choice.
Also, she faced a strong career resistance from her late husband upon marriage but he was later convinced by the late Diran Ajijedidun of the Nigerian Television Authority and Bank Olemo.
She has featured in movies such as King of Boys, Owo Blow, Family on Fire, Sade Blade, among others.
Watch the video below:
Top Stories