Yacedrah Williams went to sleep at her home in Redford, Michigan, US, on Wednesday, April 21, still wearing her lenses, and woke up at around 1am Thursday morning realising her mistake. 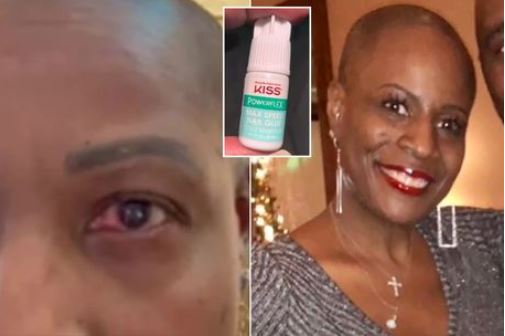 The woman went to sleep at her home in Redford, Michigan, US, on Wednesday, April 21, still wearing her lenses, and woke up at around 1am Thursday morning realising her mistake.

She grabbed her purse, where she kept a small green bottle of eye drops, but in her sleep-induced haze she instead accidentally picked out a small white bottle of nail glue she also kept in there in case she ever broke a fingernail.

After realising what she had now done, Yacedrah started yelling for her husband Derrick to phone for an ambulance.

"I was like, 'Oh my goodness'. It dropped in my eye, and I tried to wipe it away. It sealed my eye shut," Yacedrah Williams said. "I just started throwing cold water, and I was trying to pull my eyes apart but couldn’t. I was just screaming for him to call 911."

Yacedrah was rushed to the hospital, where doctors were able to open her eye and remove her contact lens.

"They said that contact saved my vision. They kept saying you’ll probably lose your lashes, which I did because they had to pull on it and flip the top of my lid," she said.

Dr George Williams, the head of Beaumont Health’s Department of Ophthalmology, said Yacedrah is not the first person to make this mistake but she did the right thing by immediately putting water in her eye.

"If you ever get anything in your eye, the immediate thing to do is try to flush your eye out. Either hold your head under a faucet, get a bottle of water, hold your eye open and just flood your eye. You’ll make a mess, but you may save your vision," he said.

Yacedrah has vowed to never keep both eye drops and nail glue in her purse again.