Nigerians have mocked Bashir Ahmad over a tweet he made saying a robbery attempt at Aso Rock is fake news. 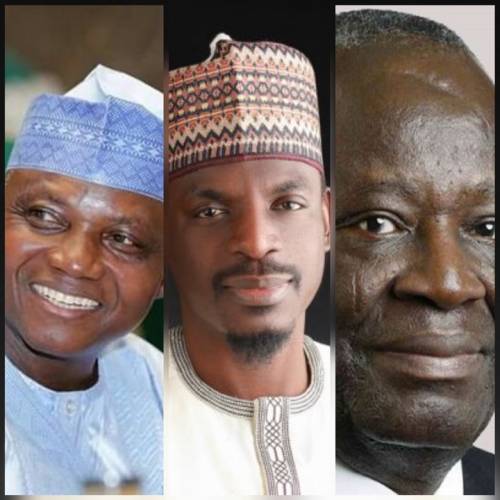 Garba Shehu, Bashir Ahmad and Gambari
The Personal Assistant on New Media to Buhari, Bashir Ahmad has been mocked on social media after he claimed that the robbery attack at Aso Rock was another fake news by detractors of President Muhammadu Buhari.
However, presidential spokesperson, Garba Shehu confirmed the attempted burglary at the residence of Professor Ibrahim Gambari, Chief of Staff to President Muhammadu Buhari, making Ahmad's accusation that the media was spreading fake news a lie.
After things turned out this way, Nigerians on Twitter called out the two for releasing conflicting statements. Many accused Ahmad of still learning the act of lying as he has yet to perfect his lying skills.
Although Shehu said the attempt was not successful, many expressed shock that such an attempt could be made close to the seat of power.
An online platform, Peoples Gazette, had earlier reported that both Gambari and an administrative officer at the Presidency, identified as Maikano, were robbed.
According to the report, which has been trending online, armed robbers invaded Aso Rock and emptied the residences of Gambari and Maikano.
Responding in a statement on Monday night, Malam Garba Shehu, presidential spokesman, said, "The Chief of Staff, Professor Ibrahim Gambari has confirmed that there 'was a foolish attempt' to burgle his residence at 3:00am this morning but it turned out to be unsuccessful.
"Professor Gambari, whose house is on the street next to the Villa, has assured that there is nothing to worry about from the incident."
Gambari succeeded the late Abba Kyari, who died in a Lagos hospital while treating coronavirus in April 2020.
Ahmad has since deleted the tweet.
See reactions below:

One of them must be lying. Either Bashir's 'fake news' is fake, or Shehu's "foolish attempt" is fake.

The number-one trumpeters of 'fake news' are often its staunchest exponents. pic.twitter.com/ZHhywATxRY

Aso Rock: How it started by Bashir vs How it's going by Garba Shehu. 😂 pic.twitter.com/m6Ih1qgRSy

Gazette released exclusive that they robbed at Aso Rock and they pointed it out clearly that Chief of Staff was robbed, Bashir came out to debunk and called it fake news. Garba Shehu confirmed that they burgled CoS house. Confused Presidency. Gazette 1, Presidency -1.

Bashir got intercepted by Garba Shehu aka the presidency. 🤣🤣🤣 pic.twitter.com/fNfXhpFT8H