The footage captured the moment parents carried the headteacher and her chair out of the front door of the school building and threw her out. 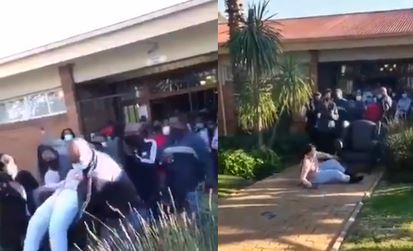 A video has surfaced online showing the moment some parents threw the headteacher of Laerskool Theresapark Primary School in Tshwane, South Africa, out for allegedly running the institution into financial disrepute.

The incident played out in the school premises on Thursday morning, May 13.

Footage captured the moment parents carried the headteacher and her chair out of the front door of the school building and threw her out.

She landed on the floor then quickly picked herself up as she faced the parents who continued to call her out.

According to reports, the headteacher was carried by parents and thrown out for allegedly bullying other staff members and "running the school into financial disrepute".

South African publication, IOL, said a message had been circulated by parents, claiming that Laerskool Theresapark has been experiencing a lot of resignations by teachers and at some point, several teachers left the school in one month.

"The school seems to be running into financial problems and it seems there is financial mismanagement at the school.

"Our kids are exposed to a toxic work environment when their teachers are bullied day in and out and parents are treated like nobodies by the principal."

Parents said the headteacher basically ran the school by fear and had no respect for anybody.

"The principal withheld the results and announcement of a new SGB, while she continues to do as she likes with appointing contractors and service providers without contracts.

"The previous financial budget was presented without actuals. So there are many issues at this school and the SGB needs every parent's support.

"Some concerned parents drafted a memorandum of demands to the principal and set a deadline but the principal ignored the deadlines and answered after hearing we are now after her."

Parents claim to also have a voice clip that can help people hear how she talks to teachers and staff, after she said she never shouts at them.

After being thrown out, the principal managed to get back into her office and locked herself in, while the local police arrived to prevent further confrontation.

Parents say "intervention or without intervention, the principal must go", IOL reports.