The suspect, Joseph Idoko, however, denied that he is an armed robber, claiming that he only helps his friends to buy guns and other weapons to do their job. 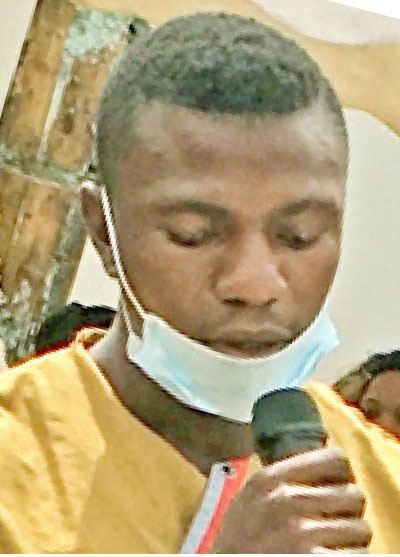 According to a report by Sun News, a 39-year-old tailor who has been in the business of linking armed robbers to gun runners for weapons procurement has landed in the police net.

The suspect, Joseph Idoko, however, denied  that he is an armed robber, claiming that he only helps his friends to buy guns and other weapons to do their job.

He added that he finds the business very lucrative and transparent as he makes his profit on the spot unlike his tailoring business where customers price him lowly and even end up not paying after making their clothes.

The native of Benue State said that unlike his tailoring business that is time and energy consuming, linking armed robbers with people who sell guns is easy and stress-free.

He admitted that he only takes them to the gun manufacturer’s house, get the guns and make his cool cash.

On how he operates, Idoko, told Sunday Sun that when the robbers approach him about buying a gun, he would ask them the type they wanted and then makes inquiry about the price and add between N30,000 or N20,000, to the original  amount, which the criminals would pay without asking questions.

After receiving the amount from them, he said that would then remove his profit before giving the balance to the gun runners who would also give him some commission.

He said that the business has been going on for sometime before he was arrested by operatives of the Inspector General of Police Intelligence Response Team (IRT).

Before his arrest, Idoko, said he had sold over 10 guns mostly AK-47 riffles and pistols which he said look and work exactly like the original one.

Speaking with Sunday Sun, Idoko revealed how he has been doing the illegal business with one Azenda Leonard,  who he claimed, he buys the guns from.

Hear him: “My name is Joseph Idoko. I am 39 years old. I went into doing gun business because of the plenty gain in the business. I am a tailor, I don’t know there was plenty money in the business until I met these gang members on my way to my shop and they told me they needed to buy guns and I told them that I know somebody who they can get it from. And that is Leonard. So I took them to Leonard. Not that I bought the guns and sold to them.

“What happens is that anybody that tells me they want to buy guns I take them to Leonard and ask them to stay somewhere while I go and meet Leonard because I don’t want people to start suspecting us. If I eventually get there, if Leonard says the gun is going for selling for N50,000, I will come back tell them he said it is N70,000, and because they too know that they are doing bad things, they will rush and pay. That way, I will make a profit of N20,000. I will then pay Leonard N50,000 and remove my gain. So far I have taken Anthony, Junior, Ben, and Emma these are the people that I have taken to buy guns before I was arrested.

“I feel ashamed that I was arrested for this kind of business, but the truth is that I am not an armed robber, I am only doing this business to survive. I am a tailor, there is no much profit in tailoring because some people after you sew their clothes will not pay what you told them and some will not even come for months after you spent all you had to buy materials to make their clothes.”

Daniel Yerwa and Azenda Leonard who were paraded alongside Joseph Idoko also spoke to Sunday Sun on how they have been operating as gunrunners.

Yerwa, a native of Kwali in the Federal Capital Territory(FCT), said that he has been into the business of arms trade and deals with all manner of criminals,  ranging from armed robbers, bandits, kidnappers, among others before he was eventually arrested.

I have sold four AK and six pistols before I was arrested.I sell them to armed robbers and other people.”