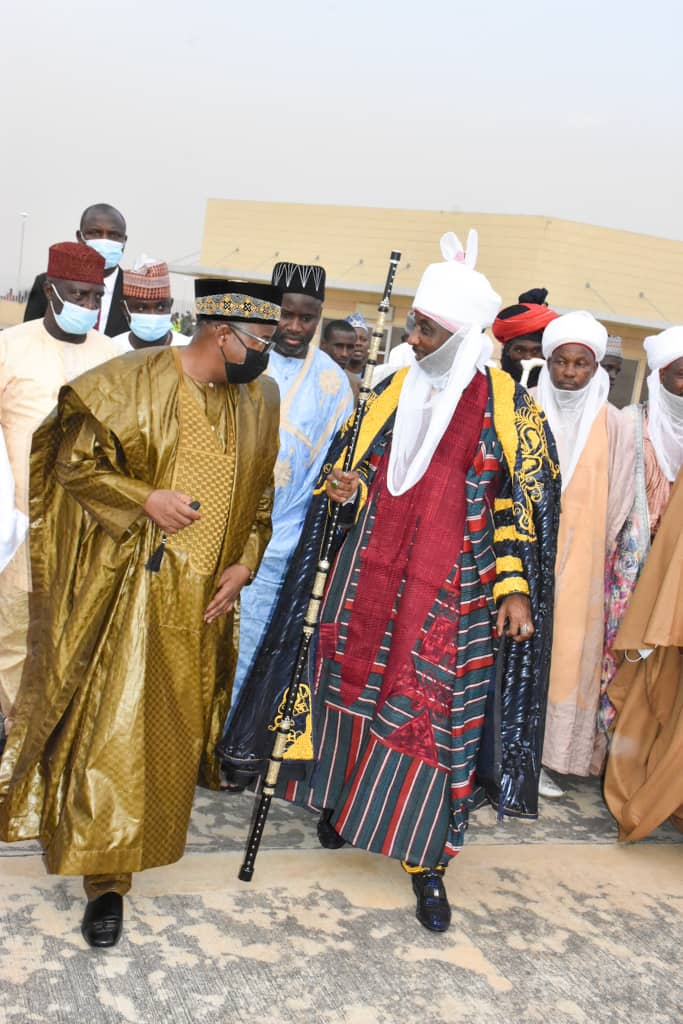 Sheikh Bauchi and Lamido
An Islamic scholar, Sheikh Dahiru Usman Bauchi has reported the governor of Kaduna state, Nasir El-Rufai to a former Emir of Kano, Sanusi Lamido who is now the leader of the Tijjaniya sect in Nigeria.
Sheikh Bauchi said he's not happy with El-Rufai for his alleged assault on Qur’anic students in the State.
He made this known on Monday while receiving Lamido, who paid him a courtesy visit in his Bauchi residence.
Sheikh Bauchi said he thought the Kaduna State governor would be in Lamido’s entourage to his house, declaring that if that was the case, the governor would have been prevented from entering the house.
Speaking in Hausa language, the elderly cleric stated that he would have instructed his guards to refuse the governor entrance into his residence.
He alleged that el-Rufa’i chased Qur’anic students away and came to his (Sheikh’s) house to harass its occupants.
“Where is el-Rufa’i? I thought he would be in your entourage. I would have asked my guards not to allow him to step into this compound.
“He chased Qur’anic students away, dumped them in the bush far away from town, came back to my house and harassed the occupants just because they were Quranic reciters.
“I am not happy over this action taken by the el-Rufa’i. It is an affront on me and I did not do anything to deserve such a treatment,” Sheikh Bauchi said.
Responding, Sanusi Lamido pleaded for forgiveness on behalf of el-Rufa’i, saying that he is sure that the governor was not aware of what transpired.
According to the former Emir of Kano, the governor, who was his long-time friend, was out of the country as of the time the incident referred to by the renowned cleric occurred.
“El-Rufa’i was not in the country when the thing happened. I was not in Nigeria too when it happened. I want to assure you that such will not happen again. I am pleading on his behalf as a friend and associate.
“I pray that the incident will not go into your heart of bitterness because the situation will become irredeemable if such happens. Nobody prays to be counted as an enemy to pious people like you. Find it in your heart to forgive him,” Khalifa Lamido pleaded.
He then informed the elderly cleric that he was in his residence to seek his (Sheikh Bauchi’s) blessings for the task ahead of him as the new leader of the Tijjaniya in Nigeria.
He also sought the support and encouragement of Sheikh Bauchi in order for him to succeed as Khalifa of the sect.
The former emir had earlier paid homage to the Emir of Bauchi, Dr Rilwanu Suleiman Adamu, in his palace and sought his blessings and support for his new role as the head of the Tijjaniya sect in the country.
Top Stories