Drama As Dangote Truck Is Caught With 600 Smuggled Rice, Three Arrested In Ogun


The NCS personnel also arrested three persons, including the truck driver, as they were conveying the consignment to the eastern part of the country. 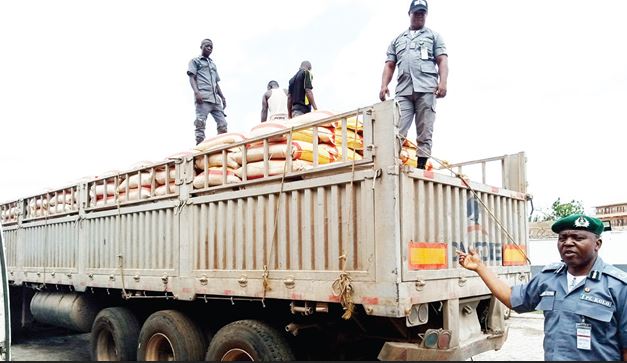 The seized truck with the smuggled bags of rice

According to PUNCH Metro, the men of the Nigeria Customs Service, Ogun 1 Area Command, have seized an articulated vehicle loaded with 600 bags of 50kg foreign parboiled rice and belonging to Dangote Cement Company.

The NCS personnel also arrested three persons, including the truck driver, as they were conveying the consignment to the eastern part of the country.

The Customs Area Controller, Peter Kolo, disclosed this on Wednesday at the monthly press briefing on the activities of the command in Idiroko.

Kolo said the truck was intercepted in the Ijoun border area of Ogun State.

He added that investigation was ongoing to unmask the persons behind the massive smuggling activity.

The controller said the command, in March, intercepted a truck belonging to the Nigerian Bottling Company used to smuggle contraband goods into the country.

On the seizure of contraband goods made by the command in the month of April, Kolo said 7,000 bags of 50kg foreign parboiled rice or equivalent of 12 trailer loads were seized.

He added that 500 book sizes of cannabis, popularly known as Indian hemp, along with the vehicles used as means of conveyance were also seized.

According to him, smuggling of foreign rice is frustrating the Federal Government’s rice and agricultural policies.

“Just a few days ago, another articulated truck bearing the inscription and logo of Dangote Cement Company was intercepted in the Ijoun border area and was loaded with over 600 bags of 50kg foreign parboiled rice and heading for the eastern part of the country.

“Three persons were arrested, including the driver of the vehicle, and investigation is going to unravel those behind the massive smuggling activity.”

The controller said various quantities of poultry products, cannabis sativa, vehicles and other means of conveyance, used clothes and shoes, used tyres, sugar, tomato in retail form, body creams and petroleum products for export were also seized during the period under review.

Kolo added, “The cumulative Duty Paid Value for the seizures in April amounted to N189,923,293.

“The Federal Government’s directive on border closure is still subsisting. A sum of N225,000 was generated from the auction of seized petroleum products and scrap metals in the month of April.”

He, however, declared that men and officers of the command would sustain the onslaught against smugglers despite several attacks on Customs personnel by smugglers and their promoters.