At least 36 persons have been massacred by suspected Fulani herdsmen in Benue state. 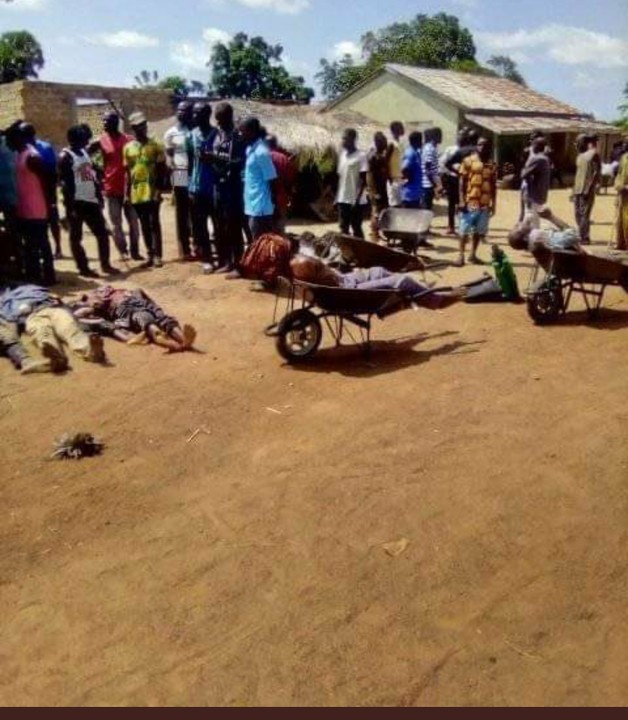 Victims of the attack (source Twitter)
A community in Benue state has been attacked leaving at least 36 persons dead.
According to Sahara Reporters, the attack was carried out by suspected Fulani herdsmen at Shikaan Mbagena Kpav, a TIV community in Benue State.
Also, students of the College of Education in Katsina Ala were among those killed.
SaharaReporters learnt that the Fulani attackers stormed the community in the early hours of Thursday, and carried out the massacre.
The incident has sparked outrage among Nigerians on social media who condemned the ongoing silent "genocide" under the President Muhammadu Buhari’s government.
There are conflicting figures of casualties as some believed the attackers might have killed up to 100 residents.
Nigerians are retweeting a hashtag, #BenueUnderAttack, and lamenting the ineptitude of the federal government and security agencies to address the situation of the killer herdsmen.
“When Israel and Palestine were at war for about eight days, the world was alarmed and everybody was shouting but in Nigeria, serious genocide is ongoing against Christians in total blackout of the press, in Benue today this is what fulani herdsmen killed over 100 people, the world is quiet,” a commentator said.
“I write this in Tears, Pain and Anguish. I have a few questions that deserve answers: What have the TIV people done? What have our ancestors done wrong that we haven’t been told to at least beg for forgiveness on their behalf? Pls Retweet to the World to see,” another wrote.
“If you see these pictures about the Genocide on going in Benue State and you are not scared or worried then you are not human. Retweet for the world to know about this ugly work done by Fulani herdsmen.”
“Don’t say it is happening in Benue and it doesn’t concern you, when they are done with Benue they will have free access to the south. Lend your voice now!!! #BenueUnderAttack.”
“Hello big brother @magnitofreshout we your fans are under attack here in Benue. There’s a bloody genocide going on. Pls lend your voice #BenueUnderAttack.”

How long will the people suffer this? Insecurity in the state is at it apex.

RETWEET AND PASS IT ON, LET THE WORLD KNOW.#BenueUnderAttack pic.twitter.com/CfMEI3CFme

What have our parents done wrong that they haven’t been able to correct?

What have our brothers & sisters done wrong that they deserve such heartless and inhuman deaths as purnishment?

What have we done wrong that the govt. and law enforcement agency have left us to our fate?

Hello big brother @magnitofreshout we your fans are under attack here in Benue. There’s a bloody genocide going on. Pls lend your voice 🙏🏽 #BenueUnderAttack